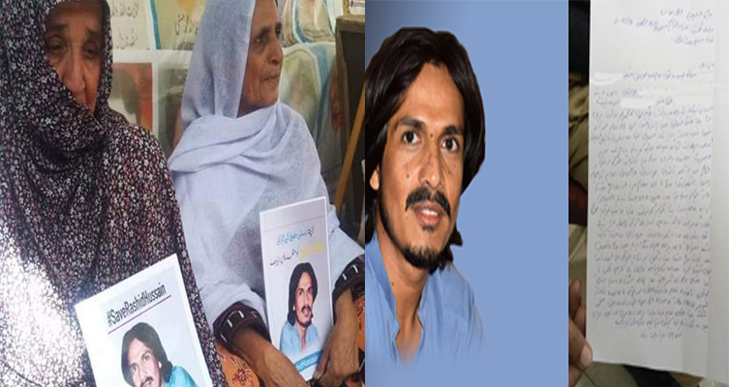 The Counter-Terrorism Department of Pakistan reportedly tried to coerce the family of the missing Rashid Hussain into signing a misleading and false statement regarding the “enforced disappearance” of Rashid Hussain from the United Arab Emirates. The family were reportedly locked up in a room and threatened that if they did not sign the statement, their loved ones will be hunted down and harmed.

According to the family members of Rashid Hussain, they were summoned to the Airport Police Station in Karachi on Monday by the Pakistani forces and pressurised to sign a false and misleading statement. The statement, concocted by the Counter-Terrorism Department of Pakistan, declared that Rashid Hussain had not been forcibly disappeared in UAE – as all the available evidence shows – but rather sent back to Dalbandin, Balochistan, by the company that employed him. He had then gone “missing” in Dalbandin.

The family members said that they were locked up in a room and threatened that if they did not sign the statement, their loved ones will be hunted down from “wherever they are” and harmed. Even when the family members were released, a vehicle of the Pakistani forces kept following them.

The family members have presented the mendacious statement which was supposed to be signed by the mother of the missing Rashid Hussain. The contrived statement reads on behalf of Rashid Hussain’s mother that her son had gone missing in Dalbandin – and not in UAE – and that her lawyer had “accidentally” written Karachi instead of Dalbandin due to her “disfluency” in Urdu.

The statement also declares on behalf of Rashid Hussain’s mother that she had given this same statement before the missing person commission earlier.

The family members said they have substantial evidence in their possession to prove that Rashid Hussain had been arrested in UAE and subsequently extradited on the behest of Pakistan. But the behavior of the Pakistani authorities shows that they want to whitewash his arrest in a veneer of false accusations.

The family members added that they are alarmed after Monday’s incident that the life of Rashid Hussain might be in danger. Their apprehension is not misplaced: the Counter-Terrorism Department of Pakistan allegedly recently killed 5 Baloch missing persons in a fake encounter, labelling them as ‘terrorists.’

The family members have repudiated the statement, saying that they demand the safe recovery of Rashid Hussain.

Who is Rashid Hussain?

Rashid Hussain was a Baloch human rights activist who was living in the United Arab Emirates as a labourer. He was arrested on December 26, 2018, by the Emirati intelligence, kept in confinement for six months and then deported to Pakistan in July of 2019. In April 2020, the counter-terrorism court in Karachi incriminated him for the Chinese consulate attack of November 2018 and declared him a “fugitive.”

Since his disappearance, Rashid Hussain’s family has been struggling for his safe recovery. His family members have knocked on many doors in search of their loved one but to no avail. Hussain’s mother and his young niece Mahzeb Shafiq were also among the families of the Baloch missing persons who staged a sit-in protest in the federal capital Islamabad earlier in February, demanding the release of their missing family members.