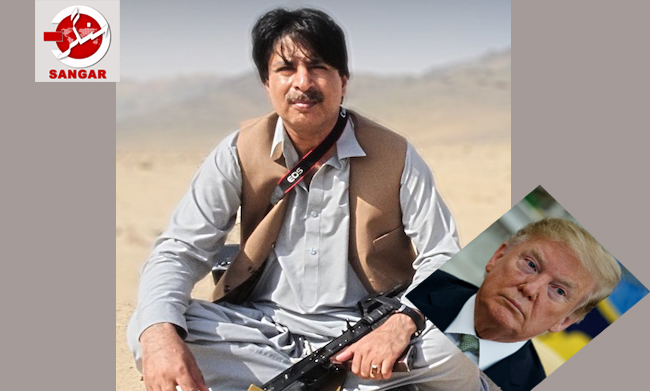 If George Washington was not a terrorist, neither are the Baloch, wrote pro-independence Baloch leader Allah Nizar Baloch in an open letter addressed to US President Donald Trump.

Imagine what would have become of what is now the United States if in 1776 France and other European powers had designated George Washington and others as terrorists and joined the United Kingdom to suppress the settlers. The United States would have remained a colony rather than becoming the beacon of democracy and progress,” he stated.
“We, the Baloch, have been resisting Pakistan’s state terrorism with knives and Kalashnikovs for the last seven decades. Armed with the most sophisticated weaponry, courtesy of US military aid, Pakistan military has kidnapped, tortured and murdered thousands of Baloch. They trade the organs of our dead, rape our women and burn our villages.

He lamented that the “champions of a secular and liberal world” have failed to support the Baloch.
“The fighter jets and other weaponry which Pakistan is using against the Baloch civilians have been provided by your predecessors. But you’ve outdone even them. Your administration branded us terrorists. Because we are not ready to let Pakistan and China plunder our resources? Well, we won’t. Even if your administration branded every single Baloch as a terrorist, we would keep fighting with our knives and Kalashnikovs,” Allah Nizar wrote
“What does the world expect from us? You fight bitter wars for every extra cent and we are expected to remain silent even as our gold, copper, gas, are looted with both hands. Our port line is being used to build someone else’s empire. Yet, we are the terrorists,” he questioned.
“What shocks me the most is the fact that we have never hurt a single US citizen, and yet we get banned by your administration? Maybe the ban is aimed at luring the Taliban to the negotiation table, or whatever. It’s part of the politics. I understand,” he stated.
Allah Nizar also stated that world leaders should not compromise on secular values for “such petty gains.”
“Once you begin sidelining natural allies like the Baloch for petty interests, your enemies would sideline you in no time. There is no problem with your desire for making friends with Pakistan, but do not compromise on your basic values and the essence of your country’s constitution,” he said.
He wrapped up the letter by drawing a similarity between the people of the US and the Baloch.
“Let me end this letter by telling you what I like most about your country. I love the sense of resistance among the American people. The U.S. citizens have shown to the world once in 1941 and then in 2001 – that they do not like to be killed. Do you know what I like about the Baloch? They don’t like to be killed either,” Allah Nizar stated, calling himself a “freedom fighter”.