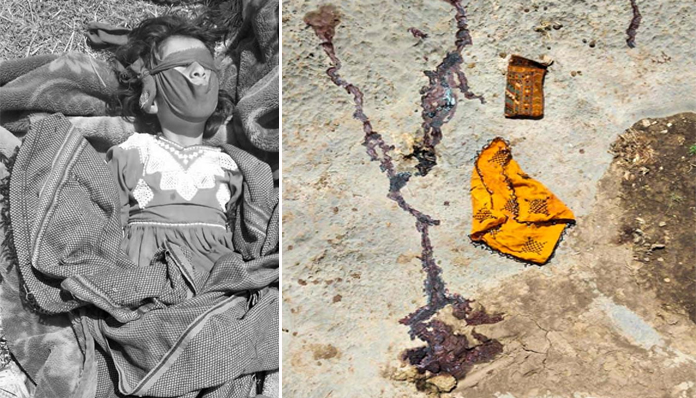 According to details, Pakistani security forces raided the house of Qaisar Chilgari Marri in Nishpa, Harnai on Monday. The house was located in a remote area as Mr Marri farmed live stock. In the early morning raid Qaisar was killed along with her daughter, daughter in law and 6-year-old grand daughter Naz Bibi.

Two of the men family members, identified as Mohammad Ali Marri and Gul Dad Marri, were arrested and taken away by the security forces. Their whereabouts are still unknown at the time of filing this report.

When we asked a local about the names and age of the other persons killed, his reply was: “the whole family has been wiped out, there is no one alive to confirm the details.”

It is not clear what sparked the raid, however, Baloch activists and human rights organisations allege that civilians are targeted by Pakistani forces whenever they are attacked by Baloch armed groups.

A local activist, on condition of anonymity told  that collective punishment has been a routine in Balochistan and today’s “callous and senseless brutality” is just another addition to the long list of human rights violations.

The act of security forces was widely condemned on social media and many activists urged international groups to intervene.

Baloch leader Dr Allah Nazar also tweeted about the incident and alleged that the “Pakistani brutalities continue unabated in Balochistan”.

Balochistan, which is home to an “independence struggle” has been witness to countless military operations by security forces and attacks by Baloch armed groups in last two decades. Human rights groups and local activists allege Pakistani forces of committing grave human rights violations in the region.