Sardar Bhagat Singh and Salman Hamal Baloch: resemblances in their aims and operations 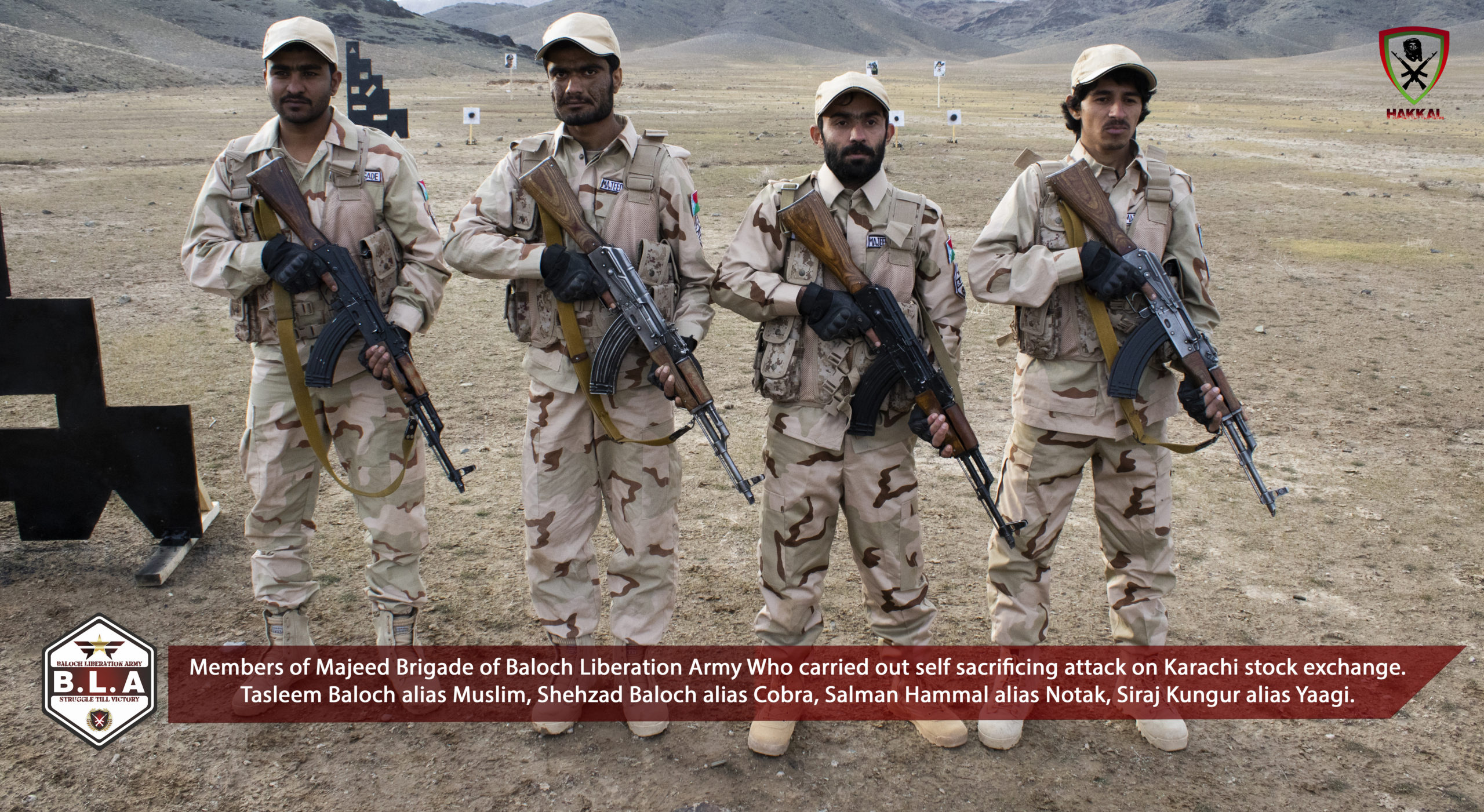 On June 29, 2020, four well-armed men attacked Pakistan Stock Exchange (PSX), Karachi. Reportedly ten men including four security guards and four attackers were killed in the incident and about a half dozen police personnel got injured. In a race for breaking news, Pakistan’s media termed the attack as an act of terrorism against civilians. Pakistan’s premier Imran Khan in his statement blamed India for planning and sponsoring the attack. Pakistan’s army, puppet prime minister, politicians, biased and controlled media tried to sell their traditional narrative of blaming India and portraying Baloch freedom fighters as Indian proxies against Pakistan but didn’t succeed. Under pressure from Pakistan’s false propaganda, a trivial segment of Indian media took a defending posturing and toed Pakistan’s version of the incident. However major international media platforms and organizations didn’t buy Pakistan’s narrative of the incident. Soon after the incident, Baloch Liberation Army in a short statement, claimed responsibility for the attack. Washington Post, Khaleej Times, Reuters, CNN, Al Jazeera and numerous other prominent media organizations mentioned the attackers as Baloch separatist militants, not terrorists. Neutral media reported the incident as an attack on the economic interests of Pakistan and China.

Later on Baloch Liberation Army’s spokesperson Jeehand Baloch, in a detailed statement, claimed responsibility of the attack on PSX, Karachi and said that it was carried out by its Majeed Brigade, which carries out self-sacrificing missions. BLA’s spokesman also revealed the descriptions of the attackers as Salman Hammal Baloch aka Notak r/o Mand Town of Turbat (the Operation Commander), Tasleem Baloch aka Muslim r/o Dasht Town Turbat, Shehzad Baloch aka Cobra r/o Paroom town of Panjgoor and Siraj Kungur aka Yagi r/o Shapuk town of Turbat.

In its detailed statement, BLA categorically refuted the blame for targeting unarmed civilians. He said “Targeting the civilians is not a part of our war-philosophy. Unlike our enemy, we do not measure the rate of success by counting the innocent lives taken but our success lies in targeting the defenders of the exploitative scheme and all its symbols. During the PSX, Karachi attack, there were clear-cut orders for the attackers do not target civilians, neither use high explosives which could jeopardize the lives of civilians, we instead chose the day when there were almost no civilians in the premises of the main building. Our fidayeen (self-sacrificing cohorts) accomplished their mission with the least casualties to the civilian lives”.

BLA’s spokesman, while clarifying the purpose of attacking PSX, Karachi, said that target of their attack was Pakistan’s economy which is built on the seventy-two years-long exploitation of the resources of occupied Balochistan and their organization views PSX, Karachi as a base and symbol of exploitative machinery of Pakistan. He further added that “attack was not only aimed at Pakistan’s but also on Chinese economic interests. He said “not only Pakistan but China is also involved in exploiting Balochistan’s resources. We have before warned China to cease expansionist and exploitative ambitions towards Balochistan. In the past, Majeed Brigade has attacked Chinese engineers in Dalbandin, the Chinese consulate in Karachi, and Chinese delegates at PC Hotel Gwadar. China holds about 40% equity in the Pakistan stock exchange through the Shanghai Stock Exchange, Shenzhen Stock Exchange, and China Financial Future Exchange. Jeehand warned, “if the Chinese continue to take part in Balochistan’s exploitation then they will face more attacks”.

Shaheed Salman Hamal Baloch and his immortal comrades’ attack on the PSX, Karachi took me years back in history and reminded me of Shaheed Sardar Bhagat Singh and his selfless comrade Sj. Batukeswar Dutt’s bombing the British India’s Central Legislative Assembly on the 8th of April, 1929 during India’s struggle for independence.

Here I see certain resemblances in the missions carried out by Shaheed Bhagat Singh and Shaheed Salman Hamal Baloch and their immortal comrades which are discussed hereinbelow:

1- Bhagat and his comrades, by harmless bombing, wanted to draw the attention of colonial rulers and the world towards the plight of the subjugated people of the Indian subcontinent. In the written statement filed by Bhagat Singh and B. K. Dutt in the Court of the Sessions Judge, Delhi, in the Assembly Bomb Case, on 6th June, 1929 they disclosed aim behind their bombing and said: “Our sole purpose was ‘to make the deaf hear’ and to give the heedless timely warning.”

Similarly, Shaheed Salman Hammal Baloch and his self-sacrificing comrades wanted to draw the attention of the world towards the aspirations and struggle of the Baloch nation for independence. They also wanted to demonstrate Baloch resolve for the independence of Balochistan to the extent that they have self-sacrificed themselves to that noble cause. They also intended to show the extent of Baloch resistance to the Pakistan-China collusion of plundering the resources of Balochistan and building their economies on such unlawful and immoral colonial exploitation of Baloch national wealth.

2- Shaheed Bhagat and B.K.Dutt didn’t intend to kill some individuals. Rather than their intention was exposing the British colonial rule, the uselessness of the powerless Central Legislative Assembly that was only a tool in the hands of the British occupiers and a disgrace to the great people of India. That’s why they threw such bombs in the Assembly which had been deliberately manufactured inoffensive. Even those harmless bombs were mostly thrown on empty spots in the Assembly intending to avoid harming anyone.

Similarly, Shaheed Salman Hammal Baloch and his immortal comrades also didn’t intend to kill or massacre innocent civilians. According to the police reports all of PSX, Karachi attackers were heavily armed. They had a large amount of ammunition and hand grenades in their backpacks. Contrary to the baseless propaganda of Pakistan’s Prime Minister, its biased and controlled media, they didn’t intend to harm civilians. If they wanted to massacre more innocent people, they could easily target a mall, mosque, railway stations, public bus stops, parks and any other public places as the jihadists usually do but they didn’t. They only wanted to hit the economy of the enemy which is built on the plundering of Balochistan’s resources.

However, there’s a single but significant difference in ending their respective missions. Bhagat and B.K. Dutt ,after throwing bombs, surrendered themselves to police because they had no fear of torture and extrajudicial killings. Their British enemies belonged to a civilized country that believed in their laws and judicial system. Bhagat and B.K. Dutt wanted to exploit the British Indian judicial system and use the proceedings to make their aims public and promote their objectives.

While Salman Hammal Baloch and his comrades had no intention of surrendering because their enemy – Pakistan- is an uncivilized and lawless state. Pakistan’s authorities and law enforcement agencies don’t believe in the constitution ,rule of law, judicial system ,democratic norms basic human rights and freedoms. Pakistan believes in dealing dissent with high handedness and savagery. Pakistan’s army and law enforcement agencies are using torture, enforced disappearances, and extrajudicial killings as tools of strategy for combating the Baloch freedom movement. Though both, Bhagat Singh and Salman Hamal Baloch”s bands of freedom fighters chose similar ways to convey their message but due to difference in the norms and values of their respective enemies-Pakistan and Britain- both Bhagat Singh and Salman Hammal Baloch ended their missions in different ways.

Despite condemnation from then British India’s colonial rulers, their justice system, and collaborators, history have rightly placed Sardar Bhagat Singh, B.K. Dutt, and all other Indian freedom fighters in the first row of national heroes. Surely Baloch history will also give the same honor to Salman Hammal Baloch and his comrades.