Occupied Balochistan :Another Baloch mother has been abducted 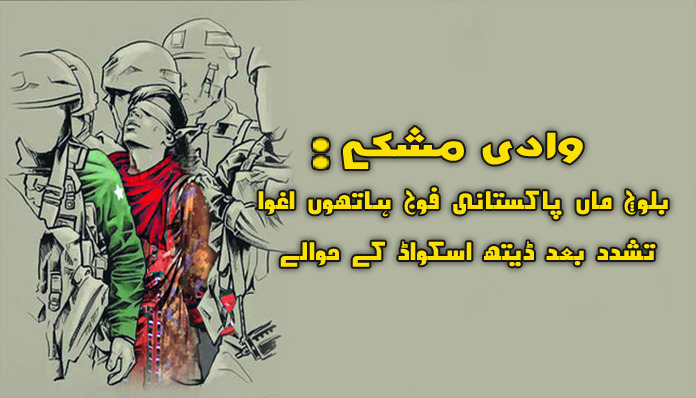 Mashkey: Another Baloch mother has been abducted and tortured, later handed over to death squads.

In Occupied Balochistan, state barbarism is continue against Baloch nation, another Baloch mother has been abducted by Pakistani forces after several tortures, she was handed over to local death squads personnel.

According to local  a Baloch mother was abducted and shifted to military camp by Pakistan Army whose name is Naz Bibi resident of Qalat area of Mashkey district Awaran four days ago. After extreme physical and mental torture she was handed over to local state backed death squad personnel Akram Sajidi.

It’s should be noticed that Previously, once Naz Bibi was abducted by same forces and after some days she got release from Pakistani military torture cells.

The Pakistani military barbarism and war crimes are on their heighten position in occupied Balochistan. The local reporter of daily Sangar asserted that it is not the first tragedy where a Baloch women became of forcibly abduction, made victimization extreme tortures and later handed over to death squads’ personnel. But, such kinds of tragedies took place in Jahoo, Koh e Isfeet, Ragy and other areas too.

The local source said that Mashkey completely turned into a military camp where after 7 o’clock, here no body allow to go to outside from their homes and in the result people are victims of agony and coercion.
However, Pakistan Army along with its backed death squads made a complete network to spread drugs among youths. According to local sources such incidents came to report that forcibly drugs injections are being used on children in Mashkey.