BLF is striving for a free Balochistan since its inception

The core reason for the establishment of the organization has always been to reinstate the separate Baloch identity and regain motherland’s sovereignty from the occupier Pakistan.

With the founding of the organization, BLF along with armed struggle, began to create political and ideological awareness to Baloch nation and has endeavored to bring Baloch people from all walks of life together to join the armed struggle, so that the masses consciously, politically and ideologically get involved in the resistance. Because, the struggle for independence is impossible without the participation of masses.

On the fundamental principle of freedom of occupied Balochistan, BLF is educating the Baloch nation to be ideologically and politically aware. Ideologically motivated BLF fighters, along with armed resistance, expanding the struggle with political awareness across Balochistan.

Baloch nation is destroying occupying state’s army and responding in a befitting manner to the parliamentarian tools, death squads, religious extremists including countering the occupying state’s propaganda machinery and its fake narrative.

Organization’s fundamental principle is to ensure vetting and educating BLF fighters enough, so that the weapon in their hands must remain a weapon in the hands of a revolutionary and their steps may never startle defending motherland.

Today, in the length and breadth of occupied Balochistan, BLF’s brave fighters are present on the ground with their revolutionary weapon in defense of their country against Pakistan’s regular army and other security forces.

Certainly, fighting on various fronts at once against Pakistan army, federalists, local agents, informers, death squads, drug dealers and religious extremists is difficult. But at every given moment, BLF fighters are sacrificing their lives and vigorously leading the Baloch national struggle on the principles of the organization towards the ultimate goal.

Balochistan Liberation Front is the embodiment of its martyrs and nation’s unaccounted for sacrifices and if God wills, the struggle, with the organization’s principles and values will reach the destination.

During the month of August 2020, Eleven (11) lethal attacks were carried out on Pakistani forces. More than twenty-one (21) soldiers were killed and more than a dozen injured. 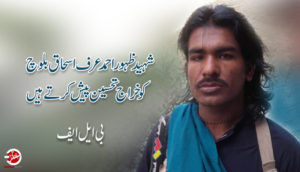 We pay tribute to the martyrdom of our fighter during a mission.

We pay homage to Zahoor Baloch one of our brave fighters who was martyred during a mission. On August 27, 2020, Second Lieutenant Zahoor Ahmed alias Ishaq Baloch, son of Sabzal Baloch, resident of Gwash Awaran, was swept away in a flash flood due to heavy rains while returning from the mission, due to which he was  martyred. The martyred Fighter, has been carrying out his responsibilities from the platform of BLF since 2013, rose to the rank of Second Lieutenant and laid down his life for the defence of the land. Appreciating his services, the organization pledges to carry out his mission of independence (Azad Balochistan) and assures to achieve the ultimate goal.

11 August 2020 –Attacked the Pakistan military camp with rockets and heavy weapons in Mashkay Gwarjak area of District Awaran, Balochistan and inflicting heavy casualties on the occupying forces. After the attack, the occupying army’s combat helicopters also started flying but they did not find any success.

Attacked the Pakistan military camp with rockets and heavy weapons in Mastung District of Balochistan and inflicting heavy casualties on the occupying forces.

14 August 2020 – Skirmish erupted between Pakistan military and BLF fighters, which lasted for around an hour. BLF fighters fired several rockets and responded with heavy weapons. 11 Pakistani military personnel were killed and a large number injured in Hikaan area of Gishkaur, District Awaran, Balochistan.