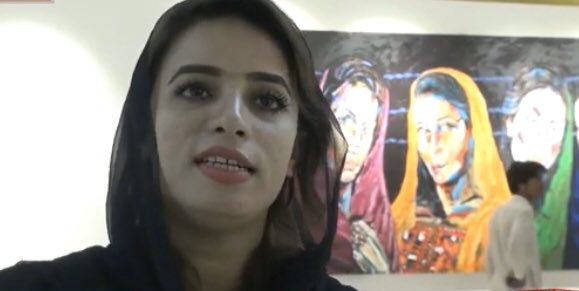 Shahina Shaheen, a 28-year-old social activist and woman empowerment activist from Makran, was shot twice in a government colony in Turbat, the capital of Kich District, September 5.
On the same day, Mehrab Gichki, son of Nawabzada Muhammad Amin Gichki, a resident of Shahi Temp, rushed him to the hospital in a vehicle with injuries. Doctors confirmed Shahina’s death due to deep wounds and excessive bleeding.

After that, Mihrab Gichki left his body in the hospital and fled from there.
Teaching Hospital Turbat is a government institution. Both the police and the FC are always on duty here to deal with similar cases with the security of the hospital.
Shahina Shaheen is answering people’s questions at her photo exhibition in Quetta.
On September 5, when Shahina Baloch’s body was brought to the hospital, two police officers and the FC went to investigate the incident on the information of the emergency ward.
Shahina’s body was brought to the hospital at 12 o’clock, but in an attempt to suppress the murder, the body was handed over to the family in the evening, with the main reason being to give the killer a chance to escape.

This is the file photo of the killer Mehrab Khan Gachki who is the husband of the slain Shahina Shaheen.
Mihrab Gachki is the grandson of the man who, out of greed and privilege, decided on the independent state of Makran with Pakistan without consulting the people.
Nawab Bhai Khan was the guardian of Makran. After becoming Pakistan, he went to Karachi without taking the people into confidence and made a deal with Pakistan.
The Pakistani state has since been paying a monthly stipend to Nawab Bayan’s family and has a special protocol.
Mehrab Gichki, son of Nawabzada Aminullah Gachki and grandson of Bayan, fell in love with Shahina Shaheen five months ago and married her. After the marriage, Shahina was told not to talk about it and to keep the marriage secret.

In PTCl Colony Turbat, a man named Akbar Gichki, who is working as Deputy Director in the PTCL department, is Mehrab Gichki’s closest relative. Both shifted to his official residence and stayed at Akbar Gachki’s official residence till his assassination.
Shahina Shaheen is answering people’s questions at her photo exhibition in Quetta.
After the marriage, Shahina became completely anonymous, her phone numbers were blocked, all social and art related activities ended. No one knows where she is. Even Shahina’s mother and sisters in the family were not allowed to contact her even though they were aware of the marriage. According to a source in Shahina’s family, Mehrab Gichki had strictly forbidden Shahina and her mother to meet or talk about marriage and threatened to kill her mother, four sisters and relatives if they talked They will be damaged.

The role of Mihrab Gichki

Mehrab Gichki’s first cousin Didag Gachki runs the Death Squad with the famous Maulvi Mufti Shah Mir Aziz.
They have training centers near Shahi Temp and Koshkalat where Mufti Shah Mir Aziz and Mullah Ghulamullah recruit and train regularly for Lashkar-e-Khorasan.
Didig Gichki is the head of the state intelligence agency Death Squad and Mehrab Gichki is a key figure in the squad. Mufti Shah Mir Aziz, Maulvi Gulamullah and Didig Gichki are jointly involved in kidnapping and killing Baloch political activists and social activists.
The same network has abducted and killed hundreds of Baloch, the most famous of which is the kidnapping of exiled political activist Haider KB, who was released three years later, while two of Haider KB’s associates were also abducted by the same death squad. At the same time, political activist Abul Hassan Karim Bakhsh was martyred while due to mutual differences, the group also killed two of its activists near Pidarak. Mihrab Gachki is an important member of this group.
The drama of marriage with Shahina Shaheen was meant to easily kill her and give it the color of domestic naughtiness or honor because according to this group Shahina’s social activities were secular and unacceptable. Lashkar-e-Khorasan, led by Mufti Shah Mir, did not consider it appropriate to assassinate Shahina in public and make a big fuss, which was an easy way to get married, but Shahina was still ready to give up her cause. Were not Her intention was to showcase the talent of the girls by holding a grand art exhibition in October. She had been preparing for the show since February and March, but had to wait because of the Corona epidemic.

File photo of slain Shahina Shaheen who is presenting PTV Quetta’s Balochi program Bolan TV as an anchor program.
Mehrab Gichki was with his family for two days after Shahina’s assassination, where he regularly met people and talked on the phone.
For the next three days, he stayed with his relatives in a village called Shahrak, 25 km east of Turbat. Police were notified but were not arrested.
When Shahina’s family met with District Police Officer Najib Pendrani and demanded the arrest of the killer, the DPO not only admitted that the killer was very influential but also said that their relationship extends to Iran and Afghanistan. Arrest is not possible.