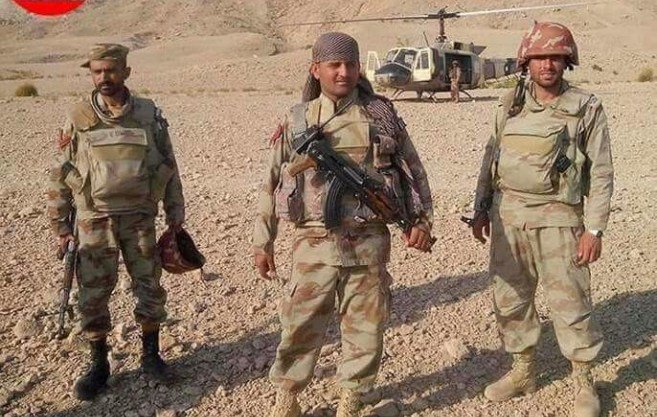 According to reports, on September 6, in pursuance of a major military operation against the Baloch freedom fighters Pakistani army ,in the dark of night, entered the famous Makran mountain range Mazanband from different directions in large numbers. The army was joined by its local spies and death squads. Informants may have informed the army of the presence of a large guerrilla camp of Baloch freedom fighters there, so the army entered the Mazanband ranges with a huge preparation . No training camp of the freedom fighters (Sarmachars ) could be found in the area. However, unaware of the presence of the army, two Sarmachars came there in the afternoon and got trapped in the enemy’s encirclement. The exchange of fire between the two sides continued till the sunset and then silence prevailed. Both Sarmachars were martyred while fighting the enemy with bravery. In this clash, Sarmachars also inflicted heavy casualties on the occupying army but the army as usual concealed heavy casualties inflicted on it. However the death of an army officer , who was killed by freedom fighters in Mazanband, was reported from another area while the body of an informant namely Munir Ahmed son of Abdul Rashid, a resident of Tump, was brought by the army and handed over to his heirs. Another injured informant was taken to Ketch district for treatment. News of his hospitalization also began to circulate. Army released pictures of the bodies of the two martyred sarmachars in the media. On the other hand, the spokesperson of Balochistan Liberation Front, Major Gahram Baloch, while confirming the martyrdom of two martyred sarmachars in the clash with the army, revealed the identity of martyred freedom fighters as Captain Irfan Baloch alias Imdad son of Shaheed Ghulam Mustafa and Noor Khan Baloch alias Barmash son of Noor Bakhsh.

1. As some quarters are expressing concern that the army may have used any prohibited weapons, gas or materials against Irfan Baloch and Noor Khan Baloch and to in order to hide their crime, the denied handing over the bodies of martyrs to their heirs, so that the heirs of the martyrs may not expose the war crimes of the army by conducting postmortem of the bodies.

2: Since Shaheed Irfan Baloch and Shaheed Noor Khan Baloch, despite being only two men, not only bravely fought the heavy contingent of the army for more than three hours, but also killed one of their officers and a key informant, including several army personnel. It is possible that the military personnel, outraged by their heavy casualties, desecrated the bodies of the martyrs as an expression of hatred, mutilated them. That’s why army didn’t hand over the bodies of the martyrs and buried them in the dark overnight to cover up their crime. They buried them so that no one could see the evidence of army’s hatred and savagery on the corpses. They were Sarmachar who inflicted heavy blows on the army during the war, due to which the hatred of the military personnel towards the martyrs and the insult and desecration of corpses due to this hatred at the hands of an unprofessional and uncivilized enemy like the Pakistani army is not merely a speculation. Instead happening of such a barbaric and an uncivilized act is sure because in case of the assassination of Shaheed Hayat Baloch the whole world have witnessed a glimpse of the Pakistani army’s such barbarism, hatred and animosity towards the Baloch people and its unbridledly in occupied Balochistan.

3: One of the reasons may be that the army wants to bury the Baloch martyrs like unowned people and make them examples so that can spread fear and terror among the Baloch people and prevent them from conscious struggle and resistance for national liberation. ۔ If this is the motive behind this war crime and uncivilized act of the Pakistan Army, then it has failed miserably in achieving this objective because the heirs of the martyrs and the people, instead of being terrorised and fearing, overwhelmingly stood against such inhuman act of enemy and they are raising their voice against the army and have chosen the path of protest and resistance. By watching the video message of Shaheed Irfan Baloch’s mother on social media, the army will surely be ashamed and upset over the failure of its brutal strategy.

4: Instead of handing over the bodies of Shaheed Irfan Jan and Shaheed Noor Khan Baloch to their heirs for funeral , the purpose of burying them secretly in the dark of night is also to prevent public participation and public mobilization on the occasion of the funeral prayers of martyrs. Probably because the occupying Pakistan is terrified of the political and national consciousness and mobilization of the Baloch people. If the purpose of not giving the bodies of the martyrs was to stop the mass mobilization, then the army has also failed miserably in its purpose as well. People might used to pay homage to the martyrs by attending the funeral of the martyrs from Tump and its vicinity. However, due to not handing over the bodies, mass mobilization and protests spread from Kech to Karachi and people from different areas condemned the army in the media. The martyrs are being paid homage for their great and proud sacrifice.

Indeed, when there is a bad purpose and ill intention, the intellect stops working and the results of all the measures are inverse. The reaction of the heirs of the martyrs and the Baloch people on the issue of uncivilized act of the Pakistani army of not handing over the bodies of Shaheed Irfan Baloch and Shaheed Noor Khan to their heirs has put a positive impact on the Baloch society and Baloch independence movement. Such barbaric act and strategy of Pakistan Army further exposed Pakistan’s colonial occupation In Occupied Balochistan and its hatred and enmity against the Baloch nation. Not only this, but it has also magnified the need for national independence to the Baloch nation, which has led the heirs of the martyrs and the Baloch people to take the path of protest and resistance instead of being frightened and silent.