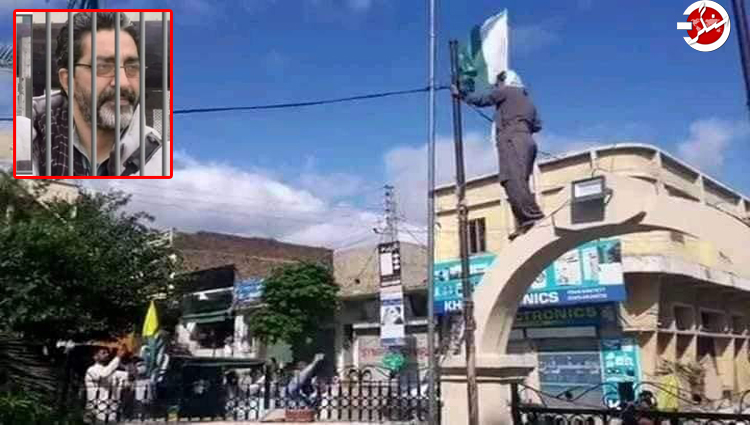 Rawalakot’s brave people deserve salutations for their heroic act. The brave people of Rawalakot foiled attempts to forcibly abduct a man in POK (Pakistan-occupied Kashmir) by the occupying state’s intelligence personnel and handed these ISI agents to the police.

It’s not the first case where the intelligence and security agencies of the occupying state tried to kidnap a citizen, but the hitherto “unknown” is now known to all. The occupying state (of Pakistan) has been historically involved in a spate of extrajudicial killings, enforced disappearances and dumping of mutilated dead bodies. These criminals are known to everyone and the people of Rawalakot can drag these culprits to the police station. The Baloch freedom fighters in Balochistan can bring them in public courts. In Khyber Pakhtunkhwa, the PTM (Pashtun Tahafuz Movement) can raise their voice against them.

Since very long we have been requesting the world to pay attention to the role of Pakistan in terrorizing people across historic nations. The world needs to know that Pakistan is an unnatural state that indulges in the oppression of oppressed nations and the massacre of people across its occupied territories. It does not take into account international laws, humanitarian norms and regulations. This occupying state has had such a terrorist role in Bangladesh, Sindh, Balochistan and Waziristan. The main reason for this lawlessness and savageness is the power to these “unknowns”. These “unknowns” routinely trample national constitution under their boots.

After the incident of Rawalakot, we have to understand that in every city of the ten districts of this so-called “Azad Kashmir”, there are brigades of the occupying army and military barracks on all entry points of each city. What is the main reason for this? Why has every city been besieged so strictly? It’s only because they need to crush and suppress all organized voices of freedom and people’s rights. These occupying powers understand that whenever people of “Azad Kashmir” organize themselves on the philosophy of a united state, it will start a people’s movement. When people begin challenging the illegal occupation of Pakistan, these predators will create conditions similar to Balochistan. As the movement becomes more organized, their oppression will intensify. It will trigger extrajudicial killings and enforced disappearances.

Today we demand an end to siege of all cities by the army. We demand the immediate abolition of military barracks and brigades. We are under siege in the name of security. What the world sees here is peace, but it is not peace, rather a peaceful siege as a result of accepting slavery over freedom. Calling slavery as slavery and demanding freedom will lead to a wave of violence and terror. Because the history of these unknown occupiers is full of oppression, violence and genocide.

These “unknown” savages gave us the body of Arif Shahid in Islamabad. Sarfraz was shot in broad daylight in Karachi and we have received the bodies of a dozen talented and promising young students from their cities. After the Rawalakot incident, some people are saying that arresting these unknown persons and handing them over to the police is backing the culprit, which is completely wrong. If any of our citizens have committed any crime, they should approach the concerned district administration. The culprit can be arrested by the local police and the courts can punish them. Those in big boots and khaki uniforms should not have the option to pick up whoever they want and make him disappear. We have been witnessing this practice in Balochistan for the last three decades.

The families of missing persons have been protesting continuously and are now helpless, but they not heard by anyone. Because this brutal army is not bound by any rule, law and constitution, such unbridled power can be bound by only one court and one power and that is the power of the people. Whether the people are Baloch, Pashtun, Sindh or Rawalakot in POK, only organized people can and will hold them accountable.