Why are women, children and elderly walking from Karachi towards GHQ Rawalpindi? – Vivek Sinha 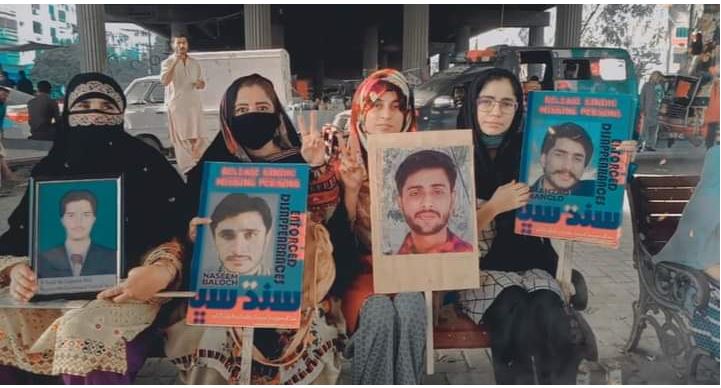 What will you do if a family member goes “missing”? Yes, you will report about the missing person and expect that the authorities find out about your “missing” family member, or at least inform about what happened to him/her. This is the normal course of action in a civilized nation. In Pakistan complaints about “missing persons” are tossed over into the dustbin and their family members continue to wait endlessly in vain, which in most cases is several years.

Over the last decade more than 40,000 Baloch and over 5,000 Sindhis have gone missing from occupied Balochistan and Sindh provinces in Pakistan. Friends and family members organized thousands of protests, filed countless litigations in the courts, approached big media groups and human rights organizations but none of these haloed institutions did anything. Absolutely nothing.

Family and friends of these missing people feel dejected and desperate. They know they have hit a dead-end. On November 10, a group of such desperate people from Karachi decided to walk on foot for 1,412 kilometers to protest in front of the GHQ (General Headquarters) Rawalpindi. GHQ is the headquarter of Pakistan Army in Rawalpindi.

But before you frown at this ‘Long March’ spare a thought for the raison d’être for such an arduous foot march.

It’s now an open secret that people in Balochistan or Sindh just do not vanish into thin air, rather they are systematically abducted by Pakistan Army, intelligence agency ISI (Inter-Services Intelligence) and other wings of the Pakistani security forces. The family members of ‘missing’ Baloch and Sindhi people have also understood that it’s only the Pakistan Army whose writ is honored across Pakistan. And since their friends and family members have been abducted by Pakistan Army or the ISI it would be best if they protest and plead with them, rather than run around the Pakistani courts.

Long March, by no means, is an easy trip. Rawalpindi is 1,412 km from Karachi and walking through this distance braving threats of Coronavirus pandemic and the harsh weather conditions is a herculean task. There are women, children and elderly who are walking in this Long March towards GHQ Rawalpindi.

When the Sindh Sabha announced this Long March from the Karachi Press Club on November 10 barely a hundred people started this arduous journey. These courageous people do not know when will they reach Rawalpindi, or if they will reach the GHQ Rawalpindi at all. Pakistan Army and Pakistani security forces are infamous for silencing people who they dislike with clinical precision. In three days the group could barely cross Karachi and has begun receiving death threats. Targeted attacks, accidents, Coronavirus the list of threats is too long to ignore.

And these threats are not just some figment of imagination. Pakistani security forces have done similar things earlier as well. In 2014 when the Voice for Baloch Missing Persons (VBMP) started a similar march from Quetta till Islamabad then also several attempts were made to eliminate the protesters. There is a high probability that the Sindh Sabha’s Long March from Karachi till GHQ Rawalpindi could meet a similar fate.

Ironically, big daddies of media and international human rights organizations have never raised a voice against the Baloch and Sindhi “Missing Persons”. And mind you, these missing persons are no small number. More than 40,000 Baloch have gone “missing” over the last decade and over 5,000 Sindhi went missing during the last few years. Over and above these missing people, thousands of Baloch and Sindhi have been forcefully abducted and killed. Yet the haloed United Nations or self-proclaimed human rights activists or even the larger media organizations continue to maintain a deafening silence

It’s not that the big media groups, the United Nations or international human rights organizations are not aware of the daily abductions and killings across Balochistan or Sindh. Ironically, they are fully aware. Why do they still choose to stay silent or look the other way when Pakistan Army or the ISI abduct and kill Baloch and Sindhi at their whims is anybody’s guess.

Pakistan Army is dominated by Punjabi Muslims and so the Punjab province considers Balochistan and Sindh provinces as their colonies and Baloch and Sindhi as second class citizens. Any Baloch or Sindhi who refuses to toe the line of Rawalpindi is simply abducted in broad day light. It’s these abducted people who join the list of “Missing Persons” in Pakistan. Since these abductions and enforced disappearances are carried out by the Pakistan Army and ISI so even the courts and provincial police do not dare to go against the diktats of Rawalpindi.

The Long March which started on November 10 is a desperate attempt by a group of Sindhi and Baloch people who decided to walk towards the GHQ Rawalpindi. This group is led by Inam Abbasi, Faisal Ara, Atif Chandio, Hani Gul Baloch, Shazia Chandio and family members of Dr Fateh Muhammad Khoso, among several others.