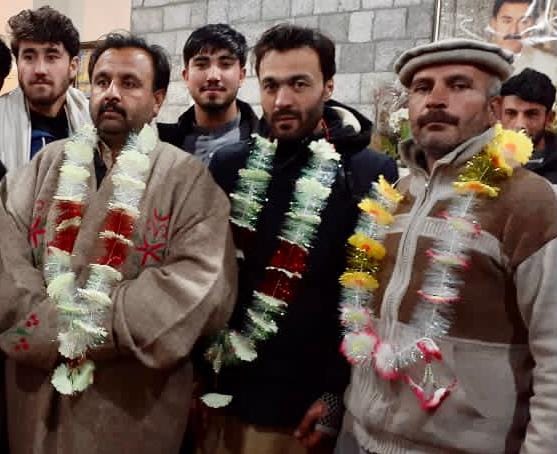 Friday, the 27th day of November, was quite special for Gilgit-Baltistan so much so that cheerful sloganeering and celebrations went on till early next morning. Almost after a decade, their beloved leader Baba Jan was set free from captivity by the Pakistan Army.

The release of Baba Jan and other political prisoners IftikharKarbalai, Aleem Khan and ShakoorullahBaig had come after arduous protests. Over the last few months, entire Gilgit-Baltistan especially the people in Hunza/Gojal Valley had been on streets demanding the release of Baba Jan. The sea of protesters included men, women, children and the elderly. People’s anger against authorities in the picturesque valley had reached a tipping point that had Pakistanis and the Chinese worried. Gilgit-Baltistan is the starting point of $64 billion CPEC (China-Pakistan Economic Corridor) and a widespread revolt in the region would mean CPEC had come to a cropper. And so the Chinese Communist Party (CCP) instructed Pakistan Army to release Baba Jan from prison.

The decision to release Baba Jan was taken sometime in October this year but it had to be delayed by another month and a half as Rawalpindi did not want Baba Jan to have any participation in Gilgit-Baltistan’s provincial elections. Rawalpindi’s fears were not unfounded. In 2015 Baba Jan had run for the Gilgit-Baltistan elections from inside the jail and despite massive rigging he had defeated the candidates propped up by Rawalpindi. Pakistan Prime Minister Imran Khan and Gen QamarJavedBajwa must have weighed in the effects of Baba Jan’s massive popularity, waited for the Gilgit-Baltistan elections to get over on November 15 and then released Baba Jan along with his comrades on the night of November 27.

Yet, this was nothing short of a miracle for the denizens of Hunza Valley. Baba Jan and his comrades were serving life sentence on charges of terrorism and there was little hope they would walk free. Yet bowing to massive demonstrations and protests the Pakistanis were forced to relent. This is the victory of people’s power. At least on the surface this seems so.

Rawalpindi’s calculation is that the elections in Gilgit-Baltistan are now over and Imran Khan’s political outfit has already won enough seats to form the provincial puppet government in the 23-seat Gilgit-Baltistan Assembly.

A closer look at the underlying facts reveal a clearer picture. Pakistanis have not acquitted Baba Jan of the terrorism charges, rather his charges have been suspended and he has simply been asked to walk out of jail to quell people’s anger. Police sources in Islamabad say that the released political prisoners can yet again be arrested at the whim of ISI or Pakistan Army.

This matter dates back to January 2010, when a massive landslide hit the Hunza Valley in Gilgit-Baltistan that killed around twenty people and blocked a portion of the River Hunza. Due to this landslide a huge artificial lake was created that submerged several villages in Attabad. This landslide was the result of massive on-going construction activities under CPEC (China-Pakistan Economic Corridor) at the Karakoram Highway whereby explosions were carried out in the seismically sensitive mountains around Hunza/Gojal Valley that subsequently triggered the landslide.

As the explosions cracked up mountains and landslide debris gushed into Hunza Valley the water flow of River Hunza got blocked and inundated dozens of villages at Attabad, Ayeenabad and Sarat. The rapidly rising water submerged around 20 kilometre area and over hundred thousand villagers across the Hunza/Gojal Valley were suddenly left homeless and fending for themselves.

Islamabad under direct instructions from Chinese masters in Beijing accorded top priority to restoring the road connectivity at the Karakoram Highway and turned a blind eye to the plea of villagers to be compensated for their homes and loss of livelihood. The water in artificially formed Attabad Lake kept rising steadily and several adjoining villages faced the threat of permanent submersion.

It was at this time when Baba Jan along with his comrades stepped in. Baba Jan became the voice of villagers across Hunza/Gojal Valley and launched massive demonstrations demanding compensation for the submerged villages and for those whose family members had died in the sudden landslide. Local administrators of Gilgit-Baltistan never bothered to offer any compensation to the thousands of villagers.

On August 11, 2011 the then chief minister of Gigit-Baltistan Syed Mehdi Shah was travelling through the reopened Karakoram Highway when the Attabad villagers under the leadership of Baba Jan blocked their cavalcade. Instead of listening to their plea the police opened fire at peaceful demonstrators and killed two people.

This news about police firing and subsequent deaths spread across Gilgit-Baltistan and protests started all across the region. People felt they were being unnecessarily targeted and their rightful compensation. CPEC was looked upon as the harbinger of death and Pakistani regime as the enabler for this spiteful project. The extent and expanse of riots across Gilgit-Baltistan had Beijing worried. These were starting years of CPEC and it was being marketed as game changer across the globe. Beijing wanted to iron out all protests in Gilgit-Baltistan

Pakistan also had to show to Chinese masters that it rules Gilgit-Baltistan with an iron hand. Baba Jan and his comrade IftikharKarbalai were promptly arrested and charges slapped under the Anti-Terrorism Act. Their bail pleas were rejected and Baba Jan along with his comrades were sentenced to seventy years in prison. Baba Jan was 35 in 2011, and a seventy year jail term meant he would not walk out of jails in his lifetime.

Islamabad did incarcerate Baba Jan and his political associates but could not erase away his popularity from the collective psyche of people across Gilgit-Baltistan, especially in the Hunza/Gojal Valley. It was Baba Jan who had first demanded rightful compensation to the people of Gilgit-Baltistan in lieu of the “development activities” carried out under CPEC. Baba Jan’s popularity continued to soar.

It’s precisely due to this reason that when Pakistan declared Gilgit-Baltistan as its fifth provinceearlier this year in order to hasten the loot of natural resources under CPEC, there were massive protests in Hunza Valley for the release of Baba Jan, who had become the rallying point. Pakistanis knew their time was running out and keeping Baba Jan behind the bars would mean an open revolt in Gilgit-Baltistanthat could even spill off to Muzaffarabad and other cities of POK (Pakistan-occupied Kashmir).

Baba Jan’s release was only a matter of time. Now Islamabad and Rawalpindi needed to time the release such that Baba Jan or his political associate IftikharKarbalai could not in any way affect the “elections” of Gilgit-Baltistan assembly. With due help from Pakistan Army, Imran Khan’s PTI (Pakistan Tehreek-e-Insaf) managed to ‘fix’ the November 15 elections in their favour. And after electoral processes were completed Baba Jan was released from jail on November 27.

However, mere suspension and not acquittal from the terrorism charges means Rawalpindi wants to keep a close eye on Baba Jan’s activities and could possibly detain him yet again.

The next few months will be crucial for Baba Jan and IftikharKarbalai as they walk the fine line of leading the people of Gilgit-Baltistan under the shadows of Rawalpindi. Probably, Attabad Lake could offer a start point. Pakistanis advertising Attabad Lake as a tourist spot is rubbing salt to the wounds of Hunza/Gojal Valley denizens who still see their villages and hamlets buried under the lake’s belly.