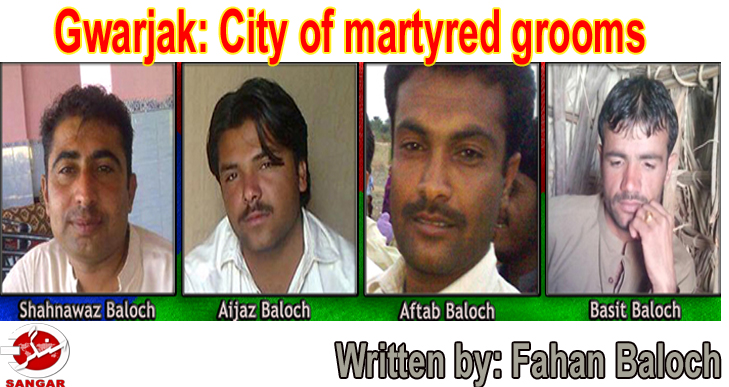 (A story on Ajaz Baloch)

This is the story of Ajaz Baloch, a resident of Mashkai Gwarjak, in Balochistan: I wish for a Free Balochistan.

Gwarjak, the area of General Akhtar Nadeem Baloch. Akhtar Nadeem Baloch is a general of the Balochistan Liberation Front (BLF). He has been fighting against the Pakistani occupation for the last 20 years. Ajaz Baloch was the commander of that area (Gwarjak). He had come there after leaving his studies in Quetta. He was a young leader and a brave soldier.

When we talk about Balochistan, the word “war” comes into our minds. There are war crimes as well. War crimes are committed by Pakistan in the form of enforced disappearances, bombardment, kill and dump, etc.

Baloch are fighting against these brutalities since the day when Balochistan was occupied. We have been aware of how our brave soldiers are fighting, sacrificing themselves for the Baloch nation. When it comes to the freedom fighters, we know so many brave Baloch fighters who have given their blood and left themselves alive forever. Ajaz Baloch is among those brave martyrs of Balochistan.

Today, Gwarjak is known after the name of Akhtar Nadeem Baloch who is a living symbol of leadership and a living legend with his intellect, courage and sacrifices. He is spreading awareness to a larger population about their rights.

Ajaz Baloch got his primary education in his hometown. After matriculation, he continued his education in Quetta. He was aware of his nation, his motherland and the brutalities of Pakistan over the Baloch people. This was enough to convince him for quitting his studies and coming back to his hometown.

He was in BSO (Baloch Students Organisation) from where he used to give books to the students to read and be aware of what Pakistan is doing to our nation. He worked in BSO for a long time and later he chose armed struggle and joined BLF in 2008.

He worked day and night on the platform of BLF. He became in charge of the BLF of his hometown Gwarjak. Ajaz Baloch was a young charming problem solver who was aware of how to lead a town and how to make its people believe in you and have faith in you. All the people of the area respected Ajaz Baloch, the young “Meer” of our town.

In 2009, one of Akhtar Nadeem’s brothers Asif Nadeem got martyred. He was the first martyr of the town. There was a voice in the whole town chanting “freedom freedom”. There was always a war going on. A few years later, there was an earthquake in Mashkay. Many people died and many houses collapsed. The Pakistani army took advantage of the earthquake and sent troops in the name of earthquake rescue. So the Pakistani army captured Mashkay.

The Pakistani army spread everywhere and started burning our houses. He came and burnt our houses too. They asked of Akhtar Nadeem and Ajaz. Luckily they were not in the town. The Pakistani colonel sent a message to Ajaz Baloch and said you have four months to come and be surrendered, so you will be forgiven.

Being surrendered in front of his enemy was not even an option in Ajaz Baloch’s mind. He was choosing the death. He said I will not surrender, you can kill me for that. I’m ready to die for my nation. Ajaz said I am fighting and will fight till the freedom. After that Pakistani army used to attack our town on daily basis.

A day comes when there we listen that Ajaz Baloch is getting married and two other grooms too. The families started preparing for the wedding. It was also the marriage of Basit Nadeem and Shah Nawaz. The wedding date was the night of 21st April 2015. It was the first night of the wedding of Ajaz Baloch.

Ajaz Jan was very happy. My fortunate I was also living in that town among those brave sons of Balochistan.

It was wedding night. I fell asleep and after a while, I heard the sound of bullets. Someone said the Pakistani army has attacked us. I got up and kept watching all the things happening in front of me. I could hear the women of the family saying “leave them, this is their marriage”. I could see those shameless army men beating the family members, not even sparing the small children. They were beating and abusing the family and the guests. Ajaz Jan, Aftab Jan, Shah Nawaz Jan, and Basit Jan were among four other guests who got arrested by the Pakistani army. They killed them early in the morning, and later, handed over their bodies to the family.

Ajaz Baloch’s brother Aftab Baloch was also a BLF soldier. He used to fight against the Pakistani army. He was Akhtar Nadeem Baloch’s special soldier. He was married in 2011. He had two children. He was too fighting for the independence of Balochistan, for about ten years. He was martyred along with his brother and the other two grooms Basit and Shah Nawaz.

In a single day, we lost four of our gems; Aftab Baloch, Basit Baloch, Shah Nawaz Baloch, and the very young gentleman Ajza Baloch. We all left Gwarjak. Gwarjak went to control of the Pakistani army.

One day, we will go back and liberate Gwarjak. Surely, we liberate Balochistan.
Long live Gwarjak, the city of martyred grooms.