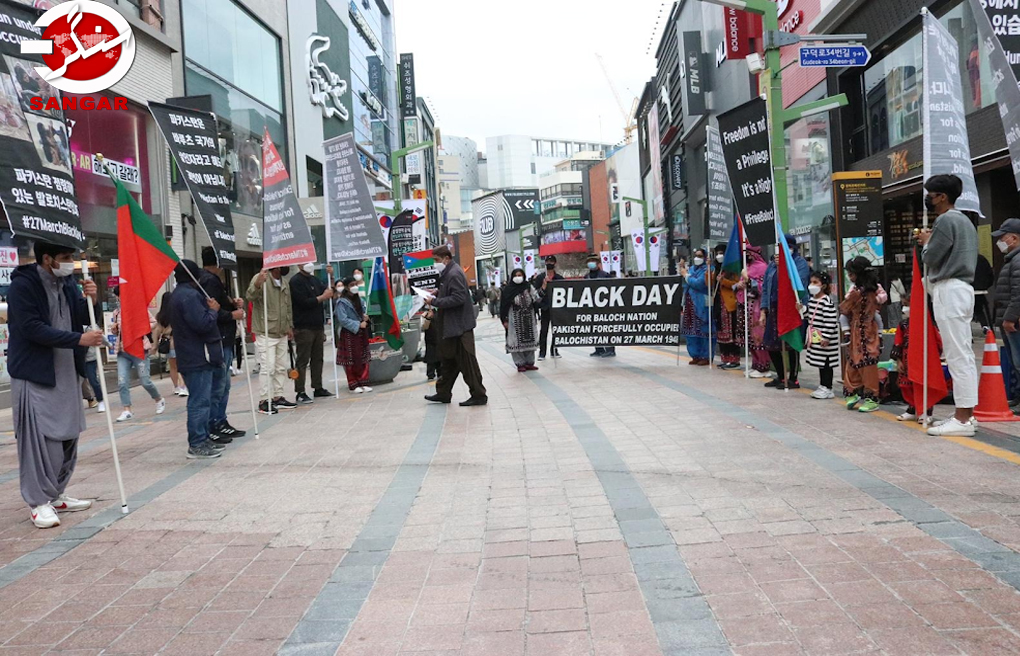 The central spokesperson of the Baloch National Moment (BNM), while publishing the details of the global protests on the occasion of March 27, the Black Day, demonstrations and rallies were organized in Germany, Netherlands, South Korea and Greece and pamphlets were distributed.

The spokesman said that the German zone had organized a protest and rally in the German city of Hannover on the occasion of March 27. A large number of Germans, including Baloch National Moment activists, took part in the demonstration and rally. The activists of Cafe Exile also actively participated in the protest and addressed the gathering. Members of Jay Sindh Federation Friends also participated in today’s demonstration.

Pamphlets were distributed during the demonstration and rally. The rally chanted slogans against Pakistan’s forcible occupation and in favour of Balochistan’s struggle for independence. The rally passed through various streets of Hannover and ended at Hannover’s central railway station. The duties of stage secretary were performed by Dosteen, vice president of the Baloch National Movement German zone.

Asghar Ali further said, “International institutions and the civilized world should know very well that if there is terrorism anywhere in the world, its links can be traced in Pakistan. We believe that it is the responsibility of international organizations to help the oppressed Baloch in their struggle for the freedom of the Baloch nation. The independence of Balochistan can guarantee peace in the region.”

Addressing the gathering, Muhammad Ali Noorani, central organizer of Jai Sindh Freedom Movement, said, “The relationship between Baloch and Sindhi nation is thousands of years old. This relationship will only get stronger with time and circumstances. We will always support each other in our struggles: be it a political struggle or in the mountains. We did not and will not accept the historic mistake of the British single Muslim state. Our Sindhi and Baloch struggle will continue till the establishment of free Sindh and a free and sovereign Balochistan. Let us join hands and continue our struggle. In this regard, Jai Sindh unconditionally supports the struggle for an independent Balochistan. Because we believe that an independent Balochistan and an independent Sindh can be the guarantors of peace in the region. ”

“Pakistan has forcibly occupied Balochistan,” said Britan, an activist of Café Exile. “This has been going on for the last 73 years. Pakistan has always tried to suppress the Baloch struggle for independence by force of arms and has inflicted innumerable atrocities on the Baloch. Balochistan was an independent state which was divided into three parts by the British under its imperialist policy and distorted its historical status. Today we have come to show solidarity with the people of Balochistan. I appeal to the world to support the legitimate right of freedom of Balochistan.”

“Anyone who talks about their rights in Balochistan is disappeared and later their mutilated body is dumped,” said Caro, an activist of Café Exile. In this regard, Pakistan is violating international law. A recent example of this is the disappearance of Baloch leader Karima Baloch in Canada and the subsequent discovery of her body, as well as the assassination of Baloch journalist Sajid Hussain in Sweden. Pakistan’s strategy is an attempt to stifle the voice of the Baloch nation around the world. Under the same policy, Islamic extremists killed three Kurdish activists.”

Nadeem Saleem, a senior member of the Baloch National Movement German Zone, said that today’s demonstration was about the “Black Day” in which the rich land of the world was forcibly occupied and made the poorest nation in the world. Today, the Baloch nation has neither access to education nor health systems. The main reason for this is the slavery of the Baloch land and the Baloch nation. Today, the Baloch have reached the point where they are forced to work in the Gulf countries because of their hunger and poverty. Today, neither the language of the Baloch nation is safe, nor the land, nor the history, nor its tradition is safe. Whenever a Baloch speaks for rights or struggles for freedom, he or she is forcibly disappeared to suppress his or her voice. It is our slavery that our mothers and sisters are going through inexplicable ordeals to recover their loved ones.”

Badal, a BNM member, also addressed the gathering and said that Balochistan was annexed by force in 1948. This occupation is tantamount to the death of the Baloch nation.

Abdul Hameed, a member of the BNM Germany zone, paid tribute to the Baloch activists and said that thousands of Baloch had sacrificed their lives for the liberation of Balochistan.

Pamphlets were distributed to the people on the occasion of March 27, the Black Day and the Occupation Day. Protesters held placards and banners with various slogans against the forcible occupation of Balochistan by the state of Pakistan.

Demonstrators chanted slogans in favour of Balochistan’s independence and against the occupation of Balochistan. Addressing the protesters, BNM Netherlands Zone President Kiyya Baloch said that on this day we were deprived of our freedom and put in the dark dungeons of slavery. This day has been observed as a dark day ever since. Baloch has never accepted and will never accept the Pakistani occupation.

“We want to tell the world that Pakistan is a tyrannical state,” Kiyya Baloch said. “Pakistan has occupied an independent country in violation of international political and humanitarian law. The Baloch are fighting against this occupation on every front against Pakistan to regain our independence and sovereign status. Baloch wants to be on the world map as a free and independent country. The Baloch struggle is to defend their land and restore their independent homeland.

BNM South Korea held a protest rally in Busan. Demonstrators held banners and placards depicting Pakistani atrocities. Participants chanted slogans against Pakistani atrocities and distributed pamphlets to locals. They told about the Pakistani occupation of Balochistan and the subsequent atrocities on the Baloch nation and Pakistan’s terrorist policies throughout the region, including Balochistan.

A correspondent for a Korean newspaper, Kokje, spoke with BNM South Korean President Waja Naseer Baloch and Chakar Baloch during the demonstration. They said that today is March 27. Today, in 1948, Pakistan occupied our independent homeland. That is why Black Day is being observed in Balochistan and all over the world today. On this day Pakistan occupied Balochistan by military coup but the Baloch nation took the path of resistance against this aggression of Pakistan and that resistance continues today in the form of a great national movement.

He said that Baloch has not surrendered to Pakistan at any stage. The Baloch have made great sacrifices in this war and this journey of sacrifice continues today. By becoming a colony of Pakistan, we lost our identity. Not only our land was taken away from us, but Pakistan started atrocities as soon as it occupied Balochistan.

Naseer Baloch said that Pakistan is not only the occupier of Baloch homeland and Baloch enemy but also the enemy of all humanity including neighboring countries. Wherever terrorism is taking place all over the world, its roots go to Pakistan and a game of fire and blood is going on in the entire region because of Pakistan. The path to peace, security and sustainable development in the region starts from independent Balochistan.

In the Greek capital, Athens, BNM members distributed pamphlets in various parts of the city, making aware the people about the March 27 Black Day.