In 2021, 176 attacks on enemy forces killed more than 226 personnel and injured dozens. BLF 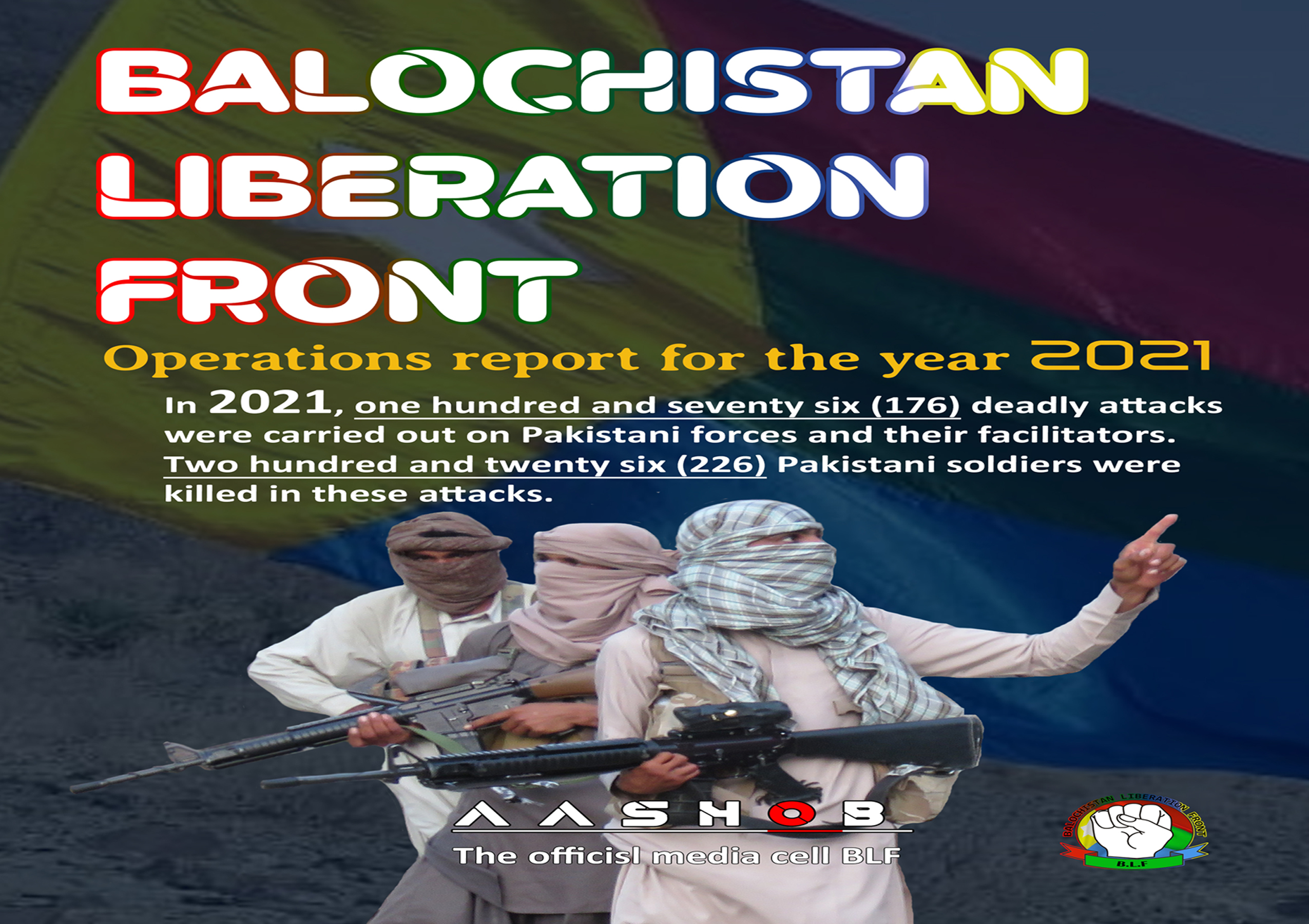 The Balochistan Liberation Front (BLF) has released its annual report on its armed operations for the liberation of occupied Balochistan from Pakistan in the year 2021.

Balochistan Liberation Front spokesman Major Gwahram Baloch said in a statement issued in the media that in the year 2021, BLF Sarmachaars have carried out 176 attacks on Pakistani forces. More than 226 members of the Pakistani army and other security forces were killed and dozens were injured.

Four (4) attacks were carried out against the Chinese telecommunication company (Zong) and its security. Two attacks were carried out on the towers of Pakistani mobile telecommunication company Ufone.
A vehicle of Chinese engineers in Karachi was hit and a Chinese national in Lyari Karachi who was an official of Sindh Solid Waste Management Board (SSWMB).

He said that 12 enemy vehicles and 16 motorcycles were destroyed in the BLF attacks.

During the three attacks, Sarmachaars seized weapons and other equipment from the occupying forces. A checkpoint was attacked and captured. Two attacks were carried out on vehicles and machinery of cement factories.

Eleven BLF Sarmachaars were martyred in defense of the motherland.

Major Gwahram Baloch further said that the movement for independence of Balochistan from the forcible occupation of Pakistan and the armed operations of BLF against Pakistan are within the parameters of international laws:

Armed struggle is one of the essential part of our national struggle to get rid of slavery and restore our national independence as no conscious man would contradict it. Whereas the enemy state (Pakistan) is an unnatural and terrorist state, in the same way the colonization of Balochistan is unnatural and an act
of terrorism. This has become clear to the world that Pakistan completely shuns and prohibits all kinds of political activities. This ban is not confined to the verbal decrees but a well-established policy that has morphed into extreme levels of violence, which is continued across Balochistan. It is quite natural that against such oppression, repression and state terrorism, the importance of armed struggle increases further.

BLF is struggling for the national liberty. Baloch Sarmachars of BLF are fighting bravely for their motherland with latest guerrilla tactics and techniques.

This occupying army lacks respect for international laws and norms with a nature of a wild beast by carrying out atrocities against innocent people. They whisk them away, torture them to death and later throw their mutilated dead bodies for display. All these actions show that we face a coward enemy that is void of human dignity.

Balochistan Liberation Front respects and follow international laws and war ethics, and only targets the security forces and their facilitators. We always try not to hurt any unarmed civilian. Despite strictly following international laws, our fighters have been able to successfully deliver sever blows to the enemy forces and broken their spirit to fight.

Our struggle will continue till the independence of occupied Balochistan.