Mumtaz Baloch alias Balach, a BLF fighter, was martyred on January 25 while fighting the occupying forces in the battle of Sibdan. It may be recalled that in the battle of Sibdan the BLF Sarmachaars defeated the enemy and killed 17 of its personnel and confiscated all their weapons and other military equipment and set fire to their camp.

Those elements in the guise of Balochism who are involved in supporting and informing the Pakistani army as well as other anti-independence activities should refrain from their anti-national activities, instead of strengthening the shackles of slavery and supporting the enemy, and do their part so that future generations will not be ashamed of them.

Major Gwahram Baloch has said that the freedom fighters have not only made the enemy forces frightened by inflicting successive defeats on them but also their morale is falling sharply. The trend in committing suicide and desertion is growing among the military personnel.

The spokesman further said that it has become inevitable for the Baloch nation to unite and struggle in this war of independence, so that a new bright day may dawn with the blood of the martyrs and the sacrifices of the nation and comrades.

Major Gwahram Baloch appealed to the people to stay away from military installations, outposts and caravans as the Sarmachars could target the enemy at any time and place.

BLF spokesman Major Gwahram Baloch said that attacks on the occupying Pakistani forces will continue till the independence of occupied Balochistan.

BLF Activities Published by AASHOB from the statements of BLF spokesperson Major Gwahram Baloch issued in Electronic and Print Media.

During the month of January 2022, twelve (12) lethal attacks were carried out on Pakistani forces and their facilitators. More than thirty-two (32) Pakistani soldiers were killed and dozens injured. Two informants of the Pakistani army were also killed.

A Sarmachaar of BLF embraced martyrdom while defending motherland against occupying forces.

Sarmachaars surrounded the Pakistani military post at Nokjo Raindak from two sides and attacked it with rockets and heavy weapons. The military post was badly damaged in the attack and all its personnel were killed and injured.

Sarmachaars attacked a military camp in Kohro area of Jhaoo with rockets and automatic heavy weapons, inflicting heavy casualties to the occupying forces.

It should be noted that this military camp has been built by occupying the high school of the area.

Sarmachaars shot dead one personnel at a military post in the Noken Rah area of Dasht, district Kech with a sniper rifle.

He was a key State Death Squad operative and state informant who had been assisting state forces in abducting Baloch and conducting various operations. He was also involved in social evils such as theft and extortion.

Safiullah was directly involved in the martyrdom of Major Noora and his associates in the Parom Kala Kaur on April 27, 2020. Here his elder brother Shakrullah son of Master Akbar was killed.

A man named Hazoor Bakhsh was shot dead during the attack on Safiullah. He is innocent and we extend our heartfelt condolences to his family and appeal to the people once again to stay away from State Death Squad members. They are being targeted by the Sarmachaars because they are supporting the Pakistani army in the Baloch genocide.

A state informant Javed son of Rahim Bakhsh, living in Buleda Menaz, was detained a week ago by Sarmachaars while he was driving a tractor and the tank, was going to supply water to the Pakistani army. He also supplied rations to the occupying army.

The informant was with the Pakistan Army during the operation in different areas of Buleda. During the interrogation, the state informant confessed to all his sins.

Sarmachaars repulsed the occupying state army with heavy weapons and rockets in a skirmish. Four army personnel were killed on the spot and several others were injured in the clash in Sor Atta Mohd, Jhaoo, district Awaran.

Three Pakistani army were killed and several others were injured in a clash with Pakistani forces in Kolwah Jat.

At 10:40 pm, Sarmachaars attacked a Pakistan Navy camp in Surbandan, Gwadar. As a result of the attack, occupying forces suffered casualties and financial losses.

The attack took place while Pakistani President Arif Ali, the so-called Chief Minister of Balochistan and the Governor were in Gwadar on a two-day visit.

A Pakistani military post in Kahir Kaur, Dasht area of Kech was attacked at 6 pm. Seventeen army personnel were killed. Sarmachaars seized enemy weapons and other military equipment and set the outpost on fire. In this attack against the occupying enemy, a BLF Sarmachaar Mumtaz alias Balach was martyred while fighting valiantly against the enemy.

Kaur, Dasht. Thirteen soldiers at the checkpoint were killed during the attack, and one managed to escape. Four soldiers on two motorcycles of the convoy approaching the outpost for the support of the soldiers were also shot dead. A total of 17 occupying army personnel were killed in the attack.

After this successful attack, Sarmachaars seized all the weapons and other military equipment of the occupying state army in the military post and set the post on fire. 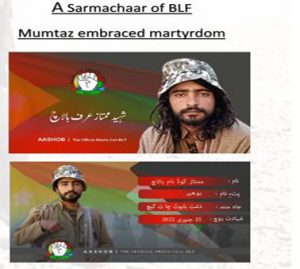