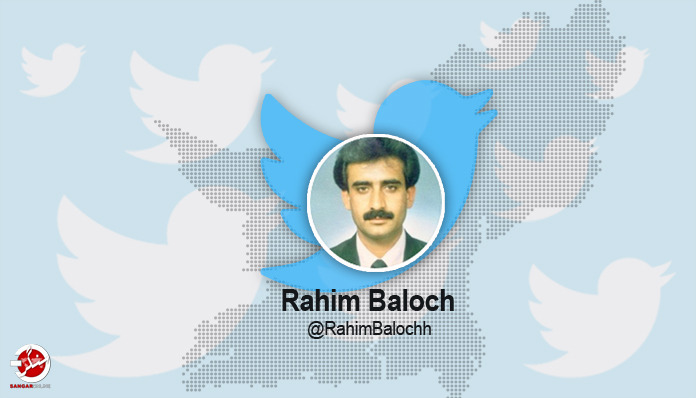 Article 6 of the International Convention for the Protection of All Persons from Enforced Disappearance describes the enforced disappearance as “a crime against humanity” and article 1 of the same convention says, “no exceptional circumstances, whatsoever, whether a state of war or a threat of war, internal political instability or any other public emergency, may be invoked as a justification for enforced disappearance.”

The language of the abovementioned articles is very clear. No ground, whatsoever, can legally be invoked as a justification for the enforced disappearance of any person, but Pakistan is unabatedly using enforced disappearance against the Baloch people in occupied Balochistan from the very inception of the ongoing Baloch armed surge for the independence of Balochistan.

The Pakistan Army, The Frontier Corps (a paramilitary force), the intelligence agencies’ personnel, and the members of the state-sponsored armed militias are involved in the enforced disappearance of the people. They arrest and abduct the people with impunity from anywhere whether it is a house, a hotel, hospital, hostel, train, airport, public bus, or any public place.

There are numerous instances in which the Frontier Corps and intelligence services have disappeared people even from the custody of police or levies force.

Here are two such incidences:

Pakistan’s security forces have been using “enforced disappearance” as an instrument of war in their so-called counter-insurgency policy against the Baloch independence struggle. As the freedom fighters aren’t only armed and militarily trained but also ready to resist furiously against any attempt by the security forces to arrest or disappear them. It is the hardest and most risky job for the security forces to arrest and make them disappear. Therefore, the security forces mostly target civil society, patriotic political activists, students, intellectuals, journalists, human rights defenders, and common people because targeting civilians aren’t only easiest and riskless but also help to spread terror among the masses.

However, it’s evident from the available record of enforced disappearances that the nationalist political activists and the students are the prime targets of enforced disappearance in occupied Balochistan. In fact, Pakistan’s security forces are committing a preplanned intellectual genocide of oppressed Baloch people so as to turn Baloch society intellectually barren.

An intense surge in the enforced disappearances of Baloch from all walks of life erupted following the capturing of Sibdaan army post on January 25, 2022 during which more than a dozen troops were killed by the Freedom Fighters of Balochistan Liberation Front (BLF), and Majeed Brigade’s attacks on army camps at Noshki and Panjgur on February 2, 2022.

It’s very important to note that the Baloch freedom fighters not only captured the Sibdaan Army post and killed army personnel but also seized all their weapons and ammunition. It’s worth mentioning that the main Army camp was about 12 furlongs away from the Sibdaan post but the army didn’t dare to go to rescue their colleagues.

Similarly, the Baloch freedom fighters of the Majeed Brigade successfully entered into both of the army camps at Noshki and Panjgur. Despite the enemy’s use of fighter jets, helicopters, armored personnel carriers, and SSG Commandos; they maintained their control over army camp for seventy hours.

After the abovementioned attacks of the Baloch freedom fighters, the Pakistan army as usual started venting out its anger on the unarmed civilians. Army disappeared Ehtesham Baloch, a student of B.S. Biotechnology in the International Islamic University Islamabad, on 3rd February 2022 from Panjgur Bus Terminal. He was killed and dumped on the same day.

Later on Hafeez Baloch, a student of MPhil. Physics in the Quaid-i-Azam University, Islamabad, was abducted by the intelligence agents when he was delivering a lecture in a local academy at Khuzdar, Balochistan.

Not long after Dr. Jamil Baloch, a political and social activist, was arrested and disappeared by the security forces on 23rd February 2022 when he was sitting in his Medical Store in Barkhan. Dilip Baloch, a student of M. A. English literature in the Islamic University, Bhawalpur, Panjab was arrested on 28th February 2022 by the Frontier Corps check post personnel at Rakhni when he was going home to spend his vacation. Dilip is lucky who have been released within two days of his disappearance.

Since 2nd February 2022, security forces of Pakistan have abducted and forcefully disappeared more than one hundred Baloch, and this evil practice by the state forces unabatedly continues.

Pakistan’s Army and intelligence services are using enforced disappearance as a tool of repression against Baloch people to suppress their struggle for independence, as well as voices for basic freedoms and rights. In fact, enforced disappearances are rampant in occupied Balochistan since 2000 with the revival of armed struggle by the Baloch nationalists.

For instance, Major General Asif Ghafoor, the former DG ISPR, in a press conference on April 29, 2019, said, while answering a question from Mr. Hamid Mir, “We know you have a great attachment to missing persons (issue). We too have. We don’t want any person to go missing but where there is a war, you have to do a number of (undesirable) things. It’s said that everything is fair in love and war. War occurs to be ruthless”.

The above-referred statement of the top Army spokesman is a clear confession of both, a war of liberation in Balochistan, as well as the use of enforced disappearance by Pakistan’s army and intelligence services.

Sometimes they even confess the disappearances in clearer words by claiming the recovery and release of the victims of enforced disappearance in huge numbers. For example, Pakistan’s Army Chief General Qamar Javed Bajwa claimed in a meeting of the National Security Committee, while answering criticism from Mr. Mohsin Javed Dawar, a Member of Parliament, that they have recovered thousands of the forcefully disappeared persons. However, he didn’t quote a single case of holding responsible the perpetrators.

The said statement of the army chief is quoted on 2nd July 2021 in “Daily Intekhab” the largest News Paper of Balochistan. There’re numerous such statements occasionally issued by the Prime ministers and their ministers. The same army chief, during his visit to Panjgur, assured the local elders on 12th February 2022 in his speech that he would try his best to make sure the release of “missing persons”. Two things can be inferred from the above statement of the Army Chief; firstly the enforced disappearances are an issue of high concern in Balochistan, secondly, the Army and other security forces are responsible for enforced disappearances.

Sometimes Pakistani authorities try to infuse doubt on the veracity of reported cases of enforced disappearances by falsely alleging that the victims have either gone abroad, particularly to Afghanistan, India, or Iran, or have joined freedom fighters in the mountains. Such false propaganda is usually disseminated by the army’s spokesman who is toed by the head of the so-called Commission of Inquiry on Enforced Disappearances, spokespersons for the puppet provincial and central governments. However, authorities have miserably failed to prove a single case of reporting a false enforced disappearance to substantiate their claim.

Similarly sometimes authorities, instead of denying, try to dispute the numbers of enforced disappearances. Such a job is also done mostly by Mr. Justice (Retired) Javed Iqbal, the head of the so-called Commission of Inquiry on Enforced Disappearances, as well as spokespersons for the puppet governments.

Irrespective of the false propaganda of state authorities, the real number of all enforced disappearances is not ascertained. Although the Voice for Baloch Missing Persons (VBMP), the Human Rights Council of Balochistan, and BNM are doing their best to document and register cases of enforced disappearances. But the lack of resources to collect information or access to the victims’ families is a hurdle in the way of their task.

Similarly, the state has also created hurdles to reduce their ability to register and report all cases. While the Commission of Inquiry on Enforced Disappearance is working only to deny, dispute, and hide the cases. However, the said organization com-plains that the victims’ families also don’t report the cases of enforced disappearances. That is why the number of registered cases is underreported. Now the question is why do the victims’ families don’t register the enforced disappearances?

Some conspicuous reasons, besides numerous others, are discussed herein bellow: