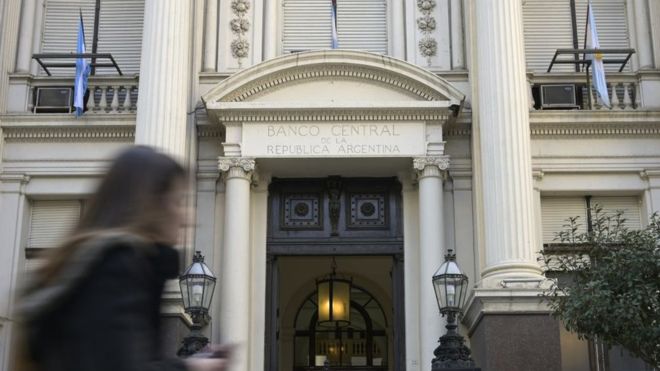 Argentina has imposed currency controls in a bid to stabilize markets as the country faces a deepening financial crisis.
The government will restrict foreign currency purchases following a sharp drop in the peso.
Firms will have to seek central bank permission to sell pesos to buy foreign currency and to make transfers abroad.
Argentina is also seeking to defer debt payments to the International Monetary Fund (IMF) to deal with the crisis.
In an official bulletin issued on Sunday, the government said that it was necessary to adopt “a series of extraordinary measures to ensure the normal functioning of the economy, to sustain the level of activity and employment and protect the consumers”.
The central bank said the measures were necessary to “maintain currency stability”.
Argentina has been struggling with a financial crisis which was exacerbated by the president’s defeat in recent a primary poll.
Mr Macri was elected in 2015 on promises to boost Argentina’s economy with a sweep of liberal economic reforms.
The country is currently in recession and has one of the highest inflation rates in the world, running at 22% during the first half of the year.
Last week, Argentina said it would seek to restructure its debt with the IMF by extending the time the country has to repay its debts.