BLF is striving for a free Balochistan since its inception

The core reason for the establishment of the organizationhas always been to reinstate the separate Baloch identity and regain motherland’s sovereignty from the occupier Pakistan.

With the founding of the organization, BLF along with armed struggle, began to create political and ideological awareness to Baloch nation and has endeavored to bring Baloch people from all walks of life together to join the armed struggle, so that the masses consciously, politically and ideologically get involved in the resistance. Because, the struggle for independence is impossible without the participation of masses.

On the fundamental principle of freedom of occupied Balochistan, BLF is educating the Baloch nation to be ideologically and politically aware. Ideologically motivated BLF fighters, along with armed resistance, expanding the struggle with political awareness across Balochistan.

Baloch nation is destroying occupying state’s army and responding in a befitting manner to the parliamentarian tools, death squads, religious extremists including countering the occupying state’s propaganda machinery and its fake narrative.

Organization’s fundamental principle is to ensure vetting and educating BLF fighters enough, so that the weapon in their hands must remain a weapon in the hands of a revolutionary and their steps may never startle defending motherland.

Today, in the length and breadth of occupied Balochistan, BLF’s brave fighters are present on the ground with their revolutionary weapon in defense of their country against Pakistan’s regular army and other security forces.

Certainly, fighting on various fronts at once against Pakistan army, federalists, local agents, informers, death squads, drug dealers and religious extremists is difficult. But at every given moment, BLF fighters are sacrificing their lives and vigorously leading the Baloch national struggle on the principles of the organization towards the ultimate goal.

Balochistan Liberation Front is the embodiment of its martyrs and nation’s unaccounted for sacrifices and if God wills, the struggle, with the organization’s principles and values will reach the destination.

The journey is certainly long and difficult, but the destination of this revolutionary war is independent Balochistan upon which Baloch’s survival and national identity depends. 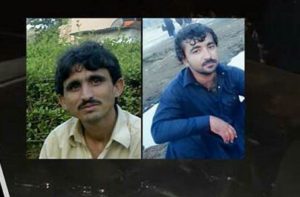 We pay homage and offer tributes to the martyr Zahid and Hammal Baloch.

On 25 April 2020, Zahid and Hammal Baloch were shot dead by the operativesof Pakistani Intelligence agencies. Martyr Zahid alias Murad was a network commander and held the rank of Lieutenant. He was fighting against the enemy for twelve years from the platform of BLF for an independent Balochistan. Martyr Hammal Baloch alias Fazal Baloch was serving the movement through BLF’s platform from ten years. 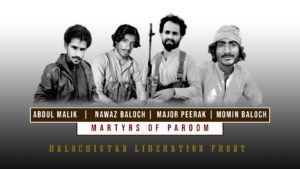 On 25 April 2020,  at around 3am, the Pakistani military and its death squads surrounded the Baloch freedom fighters in Yar Mohammad bazar in Kallag Kaur area of district ​​Panjgur, Balochistan, where a skirmish erupted between  occupying army and BLF fighters which lasted for at least 12 hours. The other day, around 1pm, after the retreat of the Pakistani ground forces, the military’s combat helicopters began shelling and martyred four of our fighters. Major Noora son of Sher Dil alias Peerak, Lieutenant Nawaz son of Haji Ghulam Hussain, Abdul Malik son of Haji Ghulam Hussain resident of Parom and Momin son of Muhammad Azeem resident of Buleda Salo were martyred in the assault. The occupying army was assisted in the clash by the local death squads. Several members of the Pakistan army and death squad were killed and wounded during the clash.We pay homage and offer tributes to the martyrs of Parom.

During the month of April 2020, eight  (8) attacks were carried out on Pakistani forces. More than ten (10) soldiers were killed and a dozen more injured. 6 BLF fighters embraced martyrdom defending their motherland. Attacked the camp of Pakistani military backed death squads and blew up a mobile network tower. Attacked and burned down two trucks loaded with mineral resources. Attacked Gwadar National Airport.

21 April  2020 – Fired two 107mm rockets on Gwadar National Airport in Gorandani area of district Gwadar. Both the rockets landed inside the airport due to which deaths of military personnel were reported and inflicted heavy causalities to the construction site.