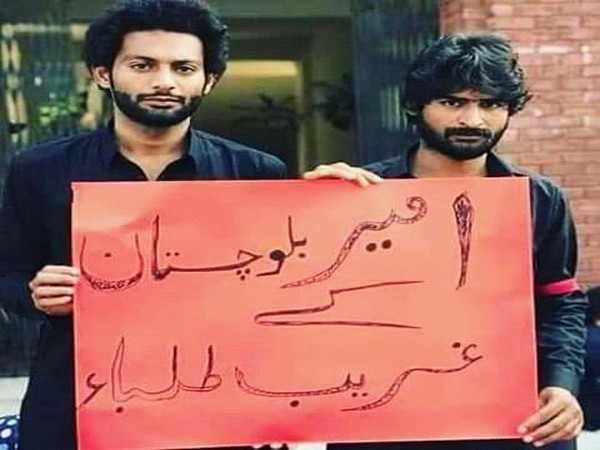 The question “Why did Shahdad Baloch choose armed struggle?” was raised by Riaz Sohail, a prominent Pakistani journalist working for BBC Urdu Service, in his Urdu article shared by BBC’ News website on May 6, 2020. The background of opening this discussion was that two prominent Baloch youths Shahdad Baloch and Ehsan Baloch attained martyrdom on Friday, May 1, 2020 in an encounter with the Pakistan Army and its locally armed mercenaries in Paarod, a mountainous area between Kalat and Kharan regions of Balochistan. According to a statement of the Baloch Liberation Army (BLA) spokesperson Jeehand Baloch, both Shahdad and Ehsan had joined BLA about one year ago.

Shahdad Baloch, after completing his master’s degree in Defence and Strategic Studies at Quaid-e-Azam (QAU), Islamabad was enrolled in the M.Phil program at the National Institute of Pakistan Studies. Whereas, Ehsan had completed his master’s degree in Gender Studies from the same QAU, Islamabad. He also had a master’s degree in English Literature from Turbat University, Kech Balochistan. So it’s evident that martyrs Shahdad and Ehsan were well educated and decent young men.

However, the circumstances suggest that Shahdad and Ehsan were not widely known because of their being highly educated or ex-students of the Quaid-e-Azam University (QAU) Islamabad, a prestigious educational institution of Pakistan. Rather, Shahdad and Ehsan attained popularity and were discussed due to their patriotism, political thoughts, student and social activism, and for their personal integrity.

The cold blooded murder of Shahdad and Ehsan arouses comparatively a wider discussion on social media platforms about both of them touching the current situation in Balochistan and Baloch freedom movement. Such painful incidents in occupied Balochistan are rampant and happen every day but usually are discussed and condemned only by pro-independence Baloch political parties, Baloch human rights organizations, socio-political and media activists, and by the exiled Baloch online media. Pakistan’s political parties, mainstream media, and civil society organizations usually don’t bother to discuss incidents related to the armed conflict in Balochistan.

Shahdad Baloch and Ehsan Baloch’s murder, after a long time, drew the attention of a comparatively larger segment of Pakistan’s intelligentsia and mainstream media towards the long-standing armed conflict in Balochistan. Pictures and videos of Shahdad Baloch and Ehsan Baloch have been going viral on Twitter, Facebook, Instagram, and other social media platforms since the heart-pinching news of their death was publicized. People expressing their grief, sympathy, concerns and anxiety over their early and violent martyrdom are mostly their ex-colleagues, fellow students, teachers, left-oriented intellectuals, human rights activists, some politicians, and journalists.

Prominent journalist and anchorperson at Geo news Mr. Hamid Mir also took the issue in a Talk Show where he replayed a short video clip of an old seminar held in QAU, Islamabad in 2018. In the video clip Shahdad Baloch can be seen asking a question to Ahsan Iqbal, then a minister in Prime Minister Nawaz Sharif’s cabinet. “…there was Saindak gold and copper project, there was Rekodik gold and copper project, natural gas had also been discovered in the early 1950s in Sui and Dera Bugti areas of Balochistan but those huge projects could not change the fate of Baloch people then how could you say that China-Pakistan Economic Corridor (CPEC ) will change our fate?” Shahdad Baloch posed this pointed question to minister Ahsan Iqbal. This video clip is being widely watched and shared across social media platforms. Link of that talk show is given below–

A picture of Shahdad Baloch is also being widely shared by social media users. In that picture martyr Shahdad Baloch can be seen bleeding from his head. This picture pertains to an incident of assault when Shahdad Baloch and many other Baloch and Pashtun students were badly beaten by the members of Islami Jamiat Talaba, the student’s wing of Jama’at Islami, Pakistan Army’s old political vassal.

Like numerous other Baloch students, political and human rights activists, Shahdad Baloch was also once abducted, kept “missing”, and tortured by the ISI in Pakistan Army’s illegal dungeons in 2015.

Some points are common in most of the tweets, Facebook, Instagram posts, articles, and blogs shared by the people from Pakistan’s intelligentsia and media. They are expressing their feelings of grief, sympathy, anxiety, and concerns. They acknowledge that both of them were active, sensitive, and vocal critics of Pakistan’s repressive politico-economic policies, army, and intelligence agencies’ brutal operations in Balochistan.

They are asking “Why did Shahdad Baloch choose armed struggle?” The answer is very simple. In the light of Pakistan’s forcible occupation of Balochistan in 1948, the Baloch people repeatedly tried to regain their independence from Pakistan. The current worsening situation of Balochistan makes it very easy to understand why Shahdad Baloch and Ehsan Baloch joined the ongoing armed struggle of Baloch people for the independence of their homeland.

Their short story, their curtailed lifespan of peaceful political, social and human rights activism suggests that they saw and felt concerned about fellow Baloch students, leaders, political and human rights activists, intellectuals, journalists and general people being abducted by Pakistan’s Army and intelligence services, who then go “missing” for uncertain periods, being extra-judicially “killed and dumped”. Both had tried for years to pursue peaceful democratic means of struggle for raising their voice against Pakistan’s state terrorism and atrocities but they were responded by Pakistan’s security forces and Punjabi supporters, with extreme hate, violence, and humiliation.

It seems that it was the Pakistani state’s response to their peaceful democratic activism that rightly helped them to choose the armed struggle. By studying history and their own experience, they knew that armed struggle was the more effective means of struggle for getting rid of Pakistan’s subjugation and achieving the independence of Balochistan. The history and nature of Balochistan and Pakistan’s relationship provide enough reasons for a patriotic and prudent person of the oppressed Baloch nation to do what Shahdad and Ehsan did.

Most of Pakistani intelligentsia and media that discussed the issue seemed to avoid honoring the way of struggle that Shahdad and Ehsan chose against Pakistan’s repression. Hamid Mir even termed their joining of Baloch Liberation Army (BLA) as their being misled by BLA. Such comments amount to maligning the political wisdom and conscience of highly talented martyrs. It also amounts to a grave injustice and dishonoring the great sacrifice of our young freedom fighters.

I don’t like to sound judgmental. I can understand why people avoid appreciating the political wisdom of Shahdad and Ehsan, their bravery and their way of struggle. I can also understand why people avoid showing sympathy and support for their noble cause of freedom. No doubt it is Pakistan’s Army and intelligence services’ fascist and chauvinistic approach that shapes the minds and people like intellectuals, journalists, teachers, students, political and human rights activists are as susceptible as the Pakistani masses.

The reaction of the Pakistani state and its supporters towards the demand for independent Balochistan has left no room for peaceful and democratic struggle and activism. The prevailing situation of state terrorism in Balochistan offers a sufficient and self-explanatory reason for understanding Shahdad and Ehsan’s decision of choosing the armed struggle.

Shahdad and Ehsan were neither the first nor will be the last. The persistence of the Baloch freedom movement for the last more than twenty years is indicative of the fact that the ongoing Baloch freedom movement is led by a collective leadership of politically enlightened, educated, highly conscious and committed leaders. Like the many others, their martyrdom is enough to falsify Pakistan’s old dirty propaganda portraying Baloch freedom movement as a resistance of certain anti-development tribal chieftains who allegedly aim to blackmail the authorities for securing some petty interests.

Instead, the martyrdom of Shahdad and Ehsan proves that the Baloch freedom movement is a true indigenous national movement having its firm roots in the masses and drawing leadership, freedom fighters, support, and sympathy from all segments of Baloch society across the occupied Balochistan.

The United Nation’s Declaration on the Granting of Independence to Colonial Countries and People (UN General Assembly’s resolution number 1514, adopted on 14th December 1960) and UN Resolution Number 55/146 adopted by the United Nation General Assembly in 2000, on the occasion of 40th anniversary of UN Resolution Number 1514 that declared 2001-2010 as the “Second International Decade for the Eradication of Colonialism” provide a legal foundation for Baloch freedom struggle against Pakistan’s forcible occupation and colonial rule and plundering of Balochistan.

Under the umbrella of the United Nations, the US-led armed interference of NATO in Afghanistan, Libya, and Iraq, their support and military partnerships with anti-Taliban, anti-Saddam, anti-Gaddafi armed militias, and American alliance with Kurdish freedom fighters of YGP against the so-called Caliphate of ISIS are recent international practices. Are people, who oppose Baloch armed struggle for freedom, not living on this planet?