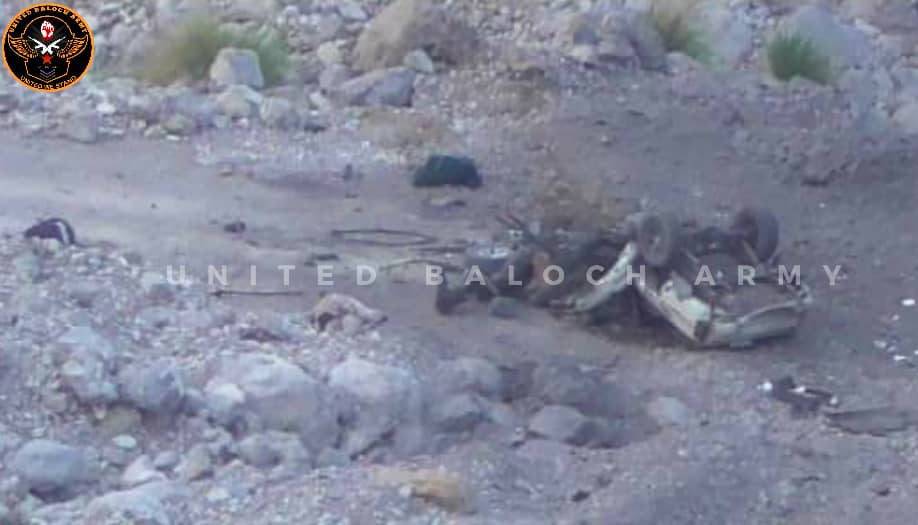 According to details , Pakistan army has been attacked six times in 2 days in different areas of Occupied Balochistan. Responsibility of the attacks have been taken by several Baloch pro-independence armed groups.

As per the reports, the security convoy of an oil and gas exploration company was targeted by an IED in Peer-Ghaib area of Bolan on Monday. A security forces’ vehicle was damaged in the attack, Initial reports said.

Later the attack was claimed by the United Baloch Army (UBA). The spokesman for the group, Mureed Baloch, said in a statement issued to the media from an undisclosed location that our fighters hit a convoy of security forces escorting an oil and gas exploration company, with a remote-controlled bomb at Peer-Ghaib in Bolan. “The attack completely destroyed the forces’ vehicle, after that our fighters also attacked other vehicles with rockets and automatic weapons,” he added.

The spokesman said that a large number of security forces and company engineers were killed in the attack.

Mureed Baloch, in his statement warns foreign companies to stop investing in Balochistan. He further said that similar attacks would continue till the independence of Balochistan.

Along with the statement, UBA has also released the photo of the vehicle wrecked in  attack.

BLF spokesperson, Goahram Baloch, claims to have killed two Pakistani army personnel in a sniper attack on Sunday morning. He said the attack was carried out on a checkpost situated at Sangastan Kandag, in Mand.

The second attack, BLF spokesman claimed was carried out in Tump Aziyan area, on Monday. The sniper attack killed one security personnel, he said.

Similarly in last two days, two attacks were claimed by Baloch Republican Army BRA. BRA spokesman, Beebagr Baloch said in a statement to the media that “on Monday morning, our fighters attacked the Pakistani army’s check-post over the Chokap River in Mand area of Kech district. The attack was carried out when army personnel were building new pickets, two army personnel were killed and one was injured in the attack.”

According to the residents of Kech district, a surge has been witnessed in military operations and enforced disappearances in the district after the recent attacks by pro-independence armed forces, specifically the attack on May 8, which killed 6 army personnel, including a major.According to sources, more than a dozen people have been abducted allegedly by Pakistan army, only in two weeks from Kech district. It is said that majority of the abductees are students.