A street demonstration was held for Sajid Hussain in Germany 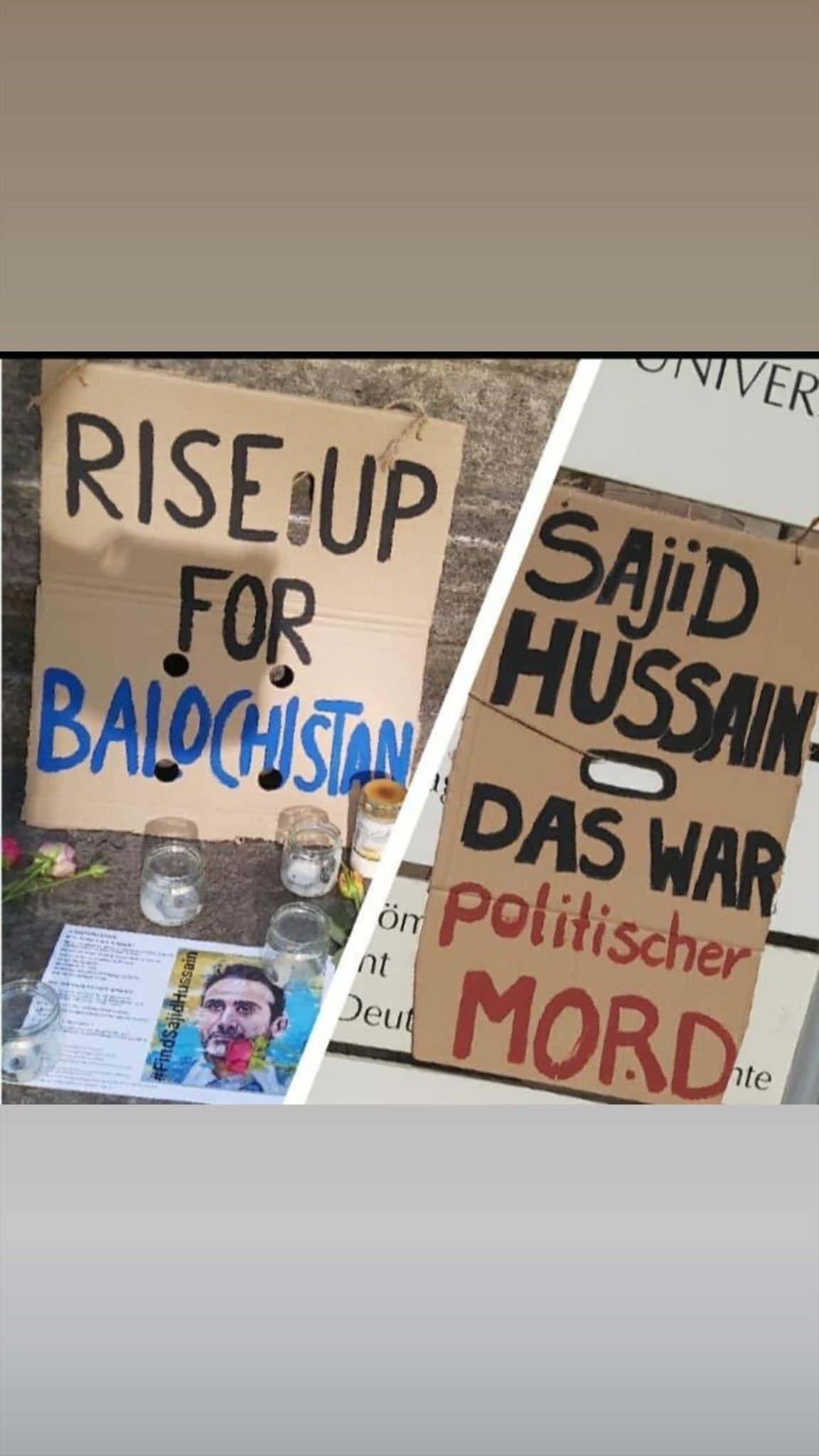 A street demonstration was held for Sajid Hussain in Göttingen Germany today. tens of participants took to the streets questioning the suspicious death of the journalist, express solidarity with him and demand justice for Balochistan. The demonstrators paid homage to Mr. Hussain and brandished placards bearing pleas and messages on Balochistan’s account.

According to  news desk; a street demonstration was held for Sajid Hussain – an exiled Baloch journalist and the antemortem editor of The Balochistan Times – in Göttingen Germany, on Monday. Hundreds of people participated in the peaceful demonstration to sympathise with Mr Hussain and condemn his unlawful killing. Furthermore, the participants held his portraits and life-sized images and appealed to the world authorities to take notice of his murder and track the culprits down.

The participants of the Göttingen demonstration held placards and banners that bore snippets like “The death of Sajid Hussain was a political murder”; “Who killed Sajid Hussain?” “Stop systematic genocide”; “Baloch activists are not safe in exile”; “Justice for Sajid Hussain”; and “Rise up for Balochistan”. The demonstrators lit candles to honour Sajid Hussain, distributed short introductions of his life and gave speeches about his role in highlighting the human rights abuses in Balochistan.

Sajid Hussain was a renowned journalist hailing from Balochistan. He had worked with various national and international media outlets. For some unaccounted reasons, Mr Hussain was banished by the Pakistani authorities. The exile forced him to leave Pakistan in 2012 and travel to UAE, Oman and Uganda; eventually acquiring asylum in Sweden in 2017. In Sweden, Mr Hussain launched an online magazine by the name of ‘The Balochistan Times’ where he “wrote about drug trafficking, forced disappearances and a long-running insurgency in Balochistan]”, The Guardian reported.

Sajid Hussain went missing in Uppsala, Sweden, on 2nd March this year and his dead body was found at the end of April in Fyris River outside Uppsala Initially, there was suspicion of crime about Mr Hussain’s sudden disappearance and eventual death. The ensuing investigation and autopsy reports reduced the likelihood of this conjecture. Journalistic organisations, on the other hand, still suspect that Mr Hussain’s death is linked with his work as a journalist. Some Global organizations and Baloch nationalist bodies blamed Pakistani intelligence agencies for his death.

Pakistan is one of the most dangerous countries for fair and transparent journalism. In the 2019 Reporters sans frontières (alias Reporters Without Borders) press freedom index, Pakistan ranked at 142 out of 180 countries. Moreover, national and international journalists have been incapacitated, threatened, abducted and even killed. Human rights groups acknowledge that the media censorship in Balochistan is “abysmal”. Owing to its “acute media restrictions” and “suppressed freedom of speech”, Balochistan, in particular, has earned the sobriquet of ‘Pakistan’s information black hole’ in the international media.